The Document Object Model (DOM) is an object-oriented representation of an HTML or XML document. The structure of an HTML and XML document is hierarchical, so the DOM structure resembles that of a tree. DOM provides an API to access and modify this tree of objects. The DOM API is specified in a language- independent manner by the W3C, and mappings are available for most programming languages. The DOM API is used in a number of situations, like on the server side in a Java program to perform some manipulation on an XML document. For the scope of this and the next chapter, we will look in more details at the DOM in the context of the browser and see how with DOM API you can dynamically modify the HTML or XHTML page.

In order to look at the structure of the DOM, consider this short, yet complete and valid XHTML page:

When displayed by a browser, it looks like Figure: 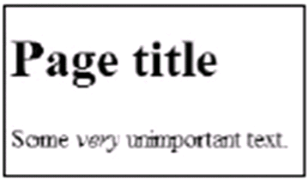 The DOM has three levels of support; each level corresponds to subsequent recommendations by the W3C: