 Roll-up (Drill-up): The roll-up operation performs aggregation on a data cube, either by climbing up a concept hierarchy for a dimension or by dimension reduction.

o One or more dimensions are removed from the given cube.

o Roll-up may be performed by removing the time dimension, resulting in an aggregation of the total sales by location, rather than by both location and by time.

 Drill-down: Drill-down is the reverse of roll-up. It navigates from less detailed data to more detailed data. Drill-down can be realized by either stepping down a concept hierarchy for a dimension or introducing additional dimensions.

• Performing a drill-down operation using stepping down a concept hierarchy

o Drill-down occurs by descending the time hierarchy from the level of quarter to the more detailed level of month.

o Consider the central cube of the figure

o A drill-down on can occur by introducing an additional dimension, such as customer group.

 Slice: The slice operation performs a selection on one dimension of the given cube, resulting in a sub cube.

o The figure shows a slice operation where the sales data are selected from the central cube for the dimension ‘time’ using the criterion ‘time= “Q1” ’.

 Dice: The dice operation defines a sub cube by performing a selection on two or more dimensions.

o The figure shows a dice operation on the central cube based on the following selection criteria that involve three dimensions: (location = “Toronto” or “Vancouver”) and (time = “Q1” or “Q2”) and (item = “home entertainment” or “computer”).

 Pivot (rotate): Pivot is a visualization operation that rotates the data axes in view in order to provide an alternative presentation of the data.

o The figure shows a pivot operation where the item and location axes in a 2-D slice are rotated.

o Other examples include rotating the axes in a 3-D cube, or transforming a 3-D cube into a series of 2-D planes.

• Drill-through operation uses relational SQL facilities to drill through the bottom level of a data cube down to its back-end relational tables.

• OLAP offers analytical modeling capabilities, including a calculation engine for deriving ratios, variance, and so on, and for computing measures across multiple dimensions.

• It can generate summarizations, aggregations, and hierarchies at each granularity level and at every dimension intersection. 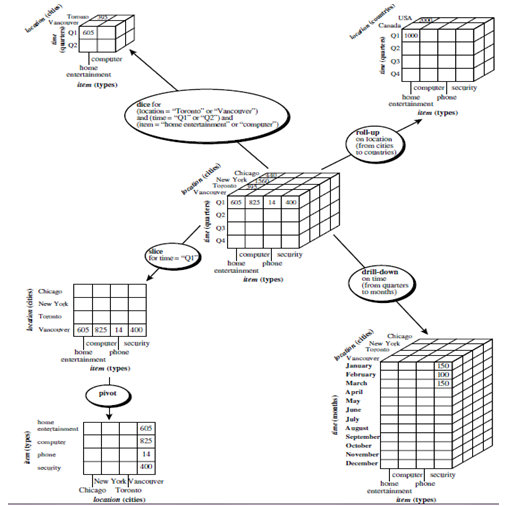 OLAP is widely used in several realms of data management. Some of these applications include: -