For simplicity, we assume that the fuzzy inference sytem under consideration has two inputs x and y and one output z. For a first-order Takagi-Sugeno fuzzy model, a common rule set with two fuzzy if-then rules is the following: 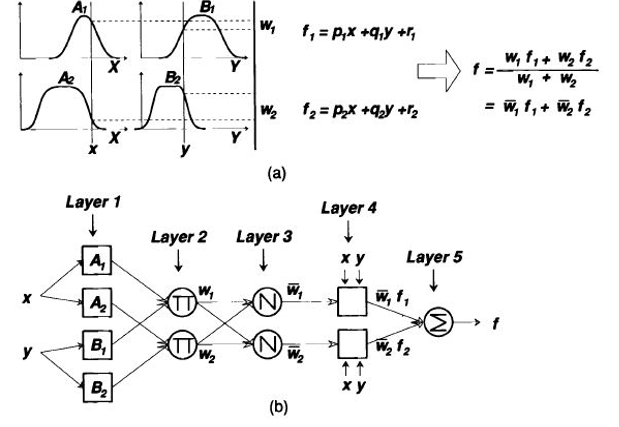 Figure 1(a) illustrates the reasoning mechanism for this Takagi-Sugeno model; the corresponding equivalent ANFIS architecture is as shown in Figure 1(b), where nodes of the same layer have similar functions, as described next. (Here we denote the output of the ith node in layer l as Ol,i )

where {ai, bi, ci} is the parameter set. As the values of these parameters change, the bell-shaped function varies accordingly, thus exhibiting various forms of membership function for fuzzy set A. Parameters in this layer are referred to as premise parameters.

Layer 2 Every node in this layer is a fixed node labeled anfis, whose output is the product of all the incoming signals:

Each node output represents the firing strength of a rule. In general, any other T-norm operators that perform fuzzy AND can be used as the node function in this layer.

Layer 3 Every node in this layer is a fixed node labeled N. The ith node calculates the ratio of the ith rule's firing strength to the sum of all rules' firing strenghts:

For convenience, outputs of this layer are called normalized firing strengthes.

Layer 4 Every node i in this layer is an adaptive node with a node function:

where anfis is a normalized firing strength from layer 3 and {pi, qi, ri} is the parameter set of this node. Parameters in this layer are referred to as consequent parameters.

Layer 5 The single node in this layer is a fixed node labeled anfis, which computes the overall output as the summation of all incoming singals:

Thus we have constructed an adaptive network that is functionally equivalent to a Sugeno fuzzy model.

Figure 2: (a) A two-rule Tsukamoto fuzzy model; (b) The equivalent ANFIS architecture

The extension from TS ANFIS to Tsukamoto ANFIS is straightforward, as show in Figure 2, where the output of each rule (fi, i=1, 2) is induced jointly by a consequent membership function and a firing strength.

For the Mamdani fuzzy inference system with max-min composition, a corresponding ANFIS can be constructed if discrete approximations are used to replace the integrals in the centroid defuzzification scheme introduced in here. However, the resulting ANFIS is much more complicated than either TS ANFIS or Tsukamoto ANFIS. The extra complexity in structure and computation of Mamdani ANFIS with max-min composition does not necessarily imply better learning capability or approximation power. If we adopt sum-product composition and centroid defuzzification for a Mamdani fuzzy model, a corresponding ANFIS can be constructed easily based on Theorem directly without using any approximation at all.