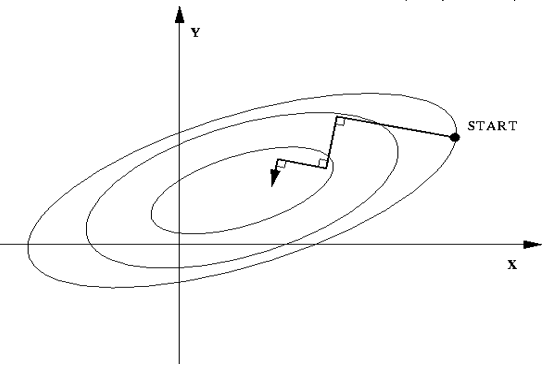 The method of Steepest Descent approaches the minimum in a zig-zag manner, where the new search direction is orthogonal to the previous.

The method of Steepest Descent is the simplest of the gradient methods. The choice of direction is where f decreases most quickly, which is in the direction opposite to $\nabla f(x_i)$ . The search starts at an arbitrary point $x_0$ and then slide down the gradient, until we are close enough to the solution. In other words, the iterative procedure is $x_{k+1}=x_k-\lambda \nabla f (x_k)=x_k-\lambda_k g(x_k)$

Setting this expression to zero, we see that $\lambda_k$ should be chosen so that $\nabla f(x_{k+1})$ and $g(x_k)$ are orthogonal. The next step is then taken in the direction of the negative gradient at this new point and we get a zig-zag pattern as illustrated in Figure above. This iteration continues until the extremum has been determined within a chosen accuracy $\in$ .

A description of some of these methods is given by Press,Walsh,Shew. Hence, the search for a minimum of $f(x)$ is reduced to a sequence of linear searches. This implementation of the Steepest Descent method are often referred to as the optimal gradient method.Alternatively, one can start out with a chosen value for $\lambda_k$ , which, if necessary, will be modified during the iterations, making sure that the function decreases at each iteration. This is of course a lot simpler, and often works better, in cases where the calculation using a linear search is laborious. It will take many more iterations to reach the minimum, but each iteration will take much less time than by using a linear search.

As seen, the method of Steepest Descent is simple, easy to apply, and each iteration is fast. It also very stable; if the minimum points exist, the method is guaranteed to locate them after at least an infinite number of iterations. But, even with all these positive characteristics, the method has one very important drawback; it generally has slow convergence. For badly scaled systems; i.e. if the eigenvalues of the Hessian $\diamond$ matrix at the solution point are different by several orders of magnitude, the method could end up spending an infinite number of iterations before locating a minimum point. It starts out with a reasonable convergence, but the progress gets slower and slower as the minimum is approached Shew. This is illustrated in Figure below, in the case of a quadratic function with a long, narrow valley. The method may converge fast for such badly scaled systems, but is then very much dependent on a good choice of starting point. In other words, the Steepest Descent method can be used where one has an indication of where the minimum is, but is generally considered to be a poor choice for any optimization problem. It is mostly only used in conjunction with other optimizing methods.

The convergence of the method of Steepest Descent. The step size gets smaller and smaller, crossing and recrossing the valley (shown as contour lines), as it approaches the minimum.