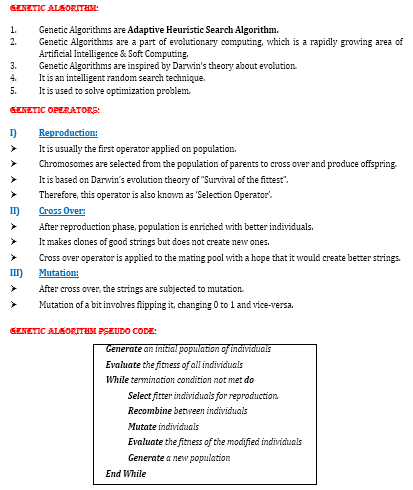 Genetic Algorithms (GAs) are adaptive heuristic search algorithm based on the evolutionary ideas of natural selection and genetics. As such they represent an intelligent exploitation of a random search used to solve optimization problems.

Although randomised, GAs are by no means random, instead they exploit historical information to direct the search into the region of better performance within the search space. The basic techniques of the GAs are designed to simulate processes in natural systems necessary for evolution, specially those follow the principles first laid down by Charles Darwin of "survival of the fittest.". Since in nature, competition among individuals for scanty resources results in the fittest individuals dominating over the weaker ones. 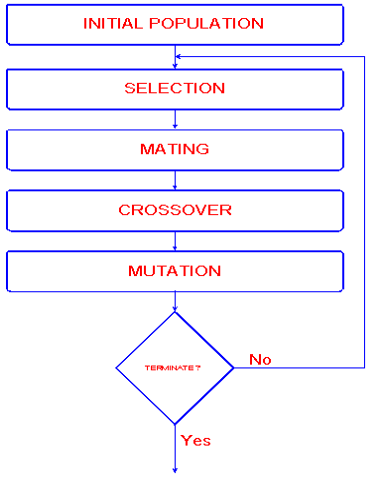 After an initial population is randomly generated, the algorithm evolves the through three operators:

selection which equates to survival of the fittest;

crossover which represents mating between individuals;

key idea: give preference to better individuals, allowing them to pass on their genes to the next generation.

The goodness of each individual depends on its fitness.

Fitness may be determined by an objective function or by a subjective judgment.

Prime distinguished factor of GA from other optimization techniques

Two individuals are chosen from the population using the selection operator

A crossover site along the bit strings is randomly chosen

By recombining portions of good individuals, this process is likely to create even better individuals

With some low probability, a portion of the new individuals will have some of their bits flipped.

Its purpose is to maintain diversity within the population and inhibit premature convergence.

Mutation alone induces a random walk through the search space