0
Explain the shape of the characteristic, identify the regions, and indicate the important current and voltage levels.

Sketch a block representation for an n-channel JFET, showing bias voltages, depletion regions, and current directions. Label the device terminals and explain its operation. Explain the effect of increasing levels of negative gate-source voltage. Also sketch a typical drain characteristics for $V_{GS} = 0$ for an n-channel JFET. Explain the shape of the characteristic, identify the regions, and indicate the important current and voltage levels.

2.When positive voltage is applied to the drain terminal D w.r.t. source terminal S without connecting gate terminal G to supply, as illustrated in fig. the electrons (which are the majority carriers) flow from terminal S to terminal D whereas conventional drain current ID flows through the channel from D to S. 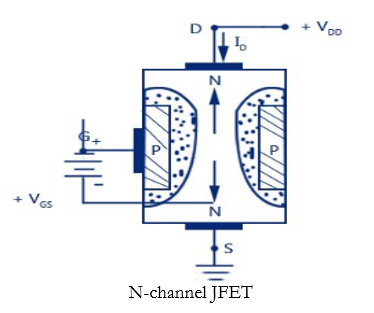 3.Due to flow of this current, there is uniform voltage drop across the channel resistance as we move from terminal D to terminal S. This voltage drop reverse biases the diode. The gate is more “negative” with respect to those points in the channel which are nearer to D than to S. Hence, depletion layers penetrate more deeply into the channel at points lying closer to D than to S. Thus wedge-shaped depletion regions are formed, as shown in figure. When $V_{DS}$ is applied. The size of the depletion layer formed determines–the width of the channel and hence the magnitude of current $I_D$ flowing through the channel.

6.The result is that the channel is narrowed, the resistance is increased and drain current $I_D$ is reduced. If the negative voltage at the gate is again increased, depletion layers meet at the center and the drain currents cut-off completely. If the negative bias to the gate is reduced, the width of the depletion layers gets reduced causing decrease in resistance and, therefore, increase in drain current $I_D$ is called the pinch-off voltage $V_p$.

7.It is also to be noted that the amount of reverse bias is not the same throughout the length of the P-N junction. When the drain current flows through the channel, there is a voltage drop along its length.

8.The result is that the reverse bias at the drain end is more than that at the source end making the width of depletion layer more at the drain. To see how the width of the channel varies with the variation in gate, go through the figure above. 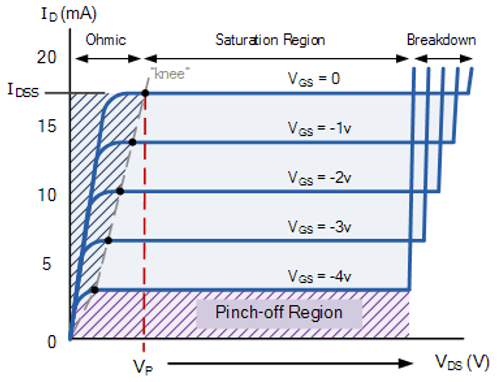 11.Because a Junction Field Effect Transistor is a voltage controlled device, “NO current flows into the gate!” then the Source current ( $I_S$ ) flowing out of the device equals the Drain current flowing into it and therefore ($I_D = I_S$ ).

12.The characteristics curves example shown above, shows the four different regions of operation for a JFET and these are given as: