0
With neat block diagram explain how PLL can be used to generate large number of frequencies from a single reference frequency.

1.In order to generate a large number of frequencies from single references, a programmable divider is inserted into the PLL as shown in figure. 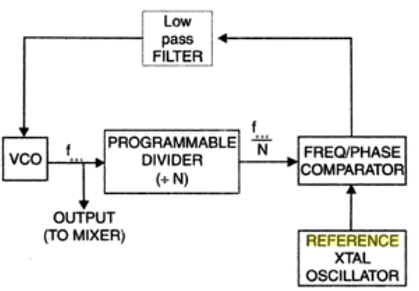 2.The loop behaves as before expected that a submultiple of the VCO is now presented to the comparator and the frequency relationship becomes.

4.Since the channel spacing requirement is 200 kHz, the reference frequency of the crystal oscillator must be 200 kHz if its multiples are fall on each FM station plus 10.7 MHz.

5.Let us calculate what the divide ratio must be when the tuner is receiving 88.1 MHz or the bottom channel on the band.

8.This means that the voltage controlled oscillator will be at a frequency of 200 KHz multiplied by 494 or 98.8 MHz.

10.For the tuner to scan the entire FM band, the programmable divider must therefore be able to divide from 495 to 593 inclusively.

11.Consequently every time a new station is desired, the divide ratio must be alterd.

12.Since several IC counters are available with a variable modulo or programmable count sequence, one of these is used here.

13.The divide ratio is altered by inserting a binary code which affects the length of the count sequence and hence the divide ratio.

14.Each channel or frequency requires a unique code which is presented to the divider.

15.The code itself is derived electronically and can be generated in a sequence which will make the tuner appear to scan across the FM band. It actually "steps" across the band rather than scans continuously since it only pauses (phase locks) on assigned channels.

16.The tuner can also be tuned or programmed by cards which present a binary code to the code generator which in turn decodes it and passes it on to the programmable divider.

17.The card system overrides the other forms of sequential tuning and allows instantaneous pre-selection of stations by using the desired card.