TOTAL MARKS: 80
TOTAL TIME: 3 HOURS (1) Question 1 is compulsory.
(2) Attempt any three from the remaining questions.
(3) Assume data if required.
(4) Figures to the right indicate full marks. 1(a) Determine the resultant of the forces acting as given in figure below. Find the angle which the resultant makes with the positive x-axis. 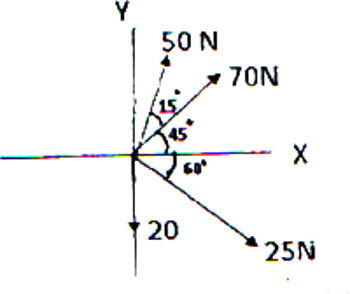 (4 marks) 1(b) Two spheres A and B are kept in a horizontal channel. Determine the reactions coming from all the contact surfaces. Consider the radius of A and B are 40mm and 30mm respectively. Take WA = 500 N and WB = 200N 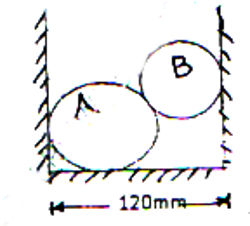 (4 marks) 1(c) Define Angle of Friction and Angle of Repose(4 marks) 1(d) Car A starts from rest & accelerates uniformly on a straight road. Another car B starts from the same place 5 seconds later with initial velocity zero & it accelerates uniformly at 5 m/sec2. If both the cars overtake at 500 m from the starting place, find the acceleration of car A.(4 marks) 1(e) Find the angle the force P makes with horizontal such that the block of mass 4 kg has an acceleration of 10m/sec2, when it is subjected to a force of 35 N. μs=0.7, μk=0.6

(4 marks) 2(a) Replace the force system by a single force w.r.to point C

(6 marks) 2(b) A uniform beam AB hinged at A is kept horizontal by supporting & setting a 100 n weight by using a string tied at B & passing over a smooth pulley at C. The beam also loaded as shown in figure below. Find the reactions at A & C.

(8 marks) 2(c) Prove that for a perfectly elastic body two equal masses participating in collision exchange their velocities.(6 marks) 3(a) Find Centroid of shaded area with reference to X and Y axes. 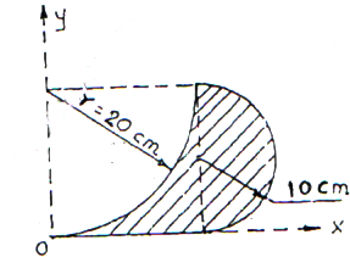 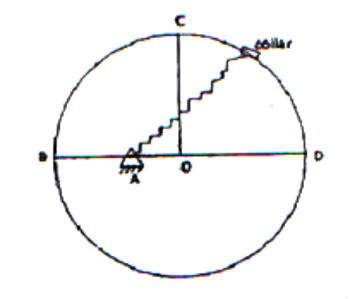 (6 marks) 4(a) Find the reactions at supports A and E for the beam loaded as shown in figure below.

(8 marks) 4(b) A fighter Plane Moving horizontally with a constant velocity of 200 m/seconds releases a bomb from an altitude of 400 m. Find the velocity and direction of the bomb just before it strikes the ground. Also determine the distance travelled by the plane before the bomb just strikes the ground.(6 marks) 4(c) Find velocity of C and point D at the instant shown ωAB = 3 rad/sec clockwise. AB = 400mm. 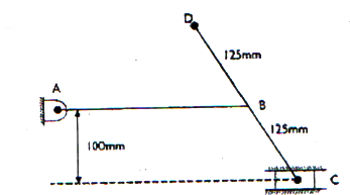 (6 marks) 5(a) Find the forces in CF and CD by method of section and the remaining by Method of Joints. 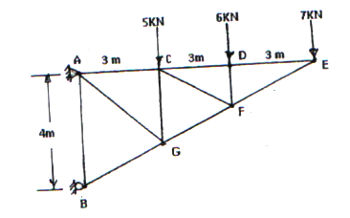 (8 marks) 5(b) For a vehicle moving along a straight line, v-t diagram is as shown in figure below. Plt a-t & s-t diagrams for the given time period. 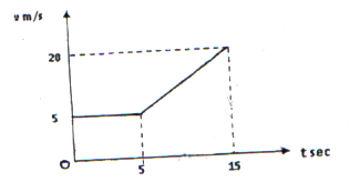 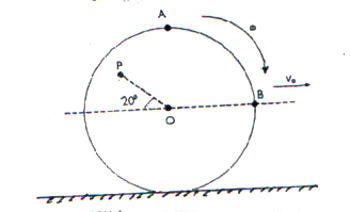 (6 marks) 6(a) A force of magnitude 500N is acting from A(2,3,6) and passes through a point B(6,2,6). Compute its moment about point C(4,6,3).(4 marks) 6(b) A stone is thrown with a velocity (u) m/sec at an angle of 20° horizontal from a point 2 m above the ground. The stone strikes the ground 5 m away from the original position. The motion of stone is subjected to gravitational acceleration & wind resistance of 0.82 m/sec2, opposing the horizontal motion. Determine the time of flight of the stone.(4 marks) 6(c) A heavy metal bar AB rests with its lower end A on a rough horizontal floor having coefficient of friction μF & the other end B on a rough vertical wall having coefficient of friction μW. If the centre of gravity of the bar is at distances a & b from the ends A & B respectively, show that at impending motion, the inclination of the bar with the horizontal will be : $\theta=\tan^{-1}\left ( \dfrac{1}{\mu_F}\dfrac{a-b\mu_F \mu_w}{a+b} \right )$ 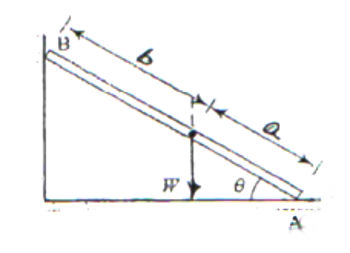 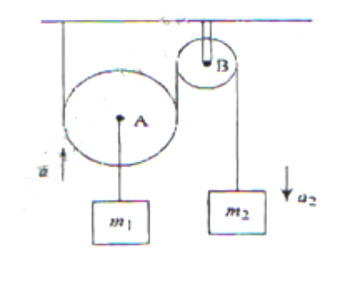