0
What is localization of WSN nodes. Explain with examples centralized & distributed schemes in localization algorithms.

Sensor nodes are distributed all over the place for sensing and data collection. It is usually helpful if the locations of sensor nodes are also known.

• Some applications, such as those for tracking of objects, are highly location dependent. Location-based Routing, which may also result in energy conservation is enabled. 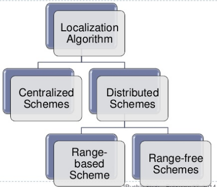 • Centralized Scheme: In this scheme Sensor nodes send control messages to a central node whose location is known. The central node then computes the location of every sensor node and informs the nodes of their locations.

i. MDS-MAP: The advantage of this scheme is that it does not need anchor or beacon nodes to start with. It builds a relative map of the nodes even without anchor nodes and next with three or more anchor nodes; the relative map is transformed into absolute coordinates. This method works well in situations with low ratios of anchor nodes. A drawback of MDS-MAP is that it requires global information of the network and centralized computation.

ii. A RSSI-based centralized localization technique: The advantage of this scheme is that it is a practical, self-organizing scheme that allows addressing any outdoor environments. The limitation of this scheme is that the scheme is power consuming because it requires extensive generation and need to forward much information to the central unit.

• Distributed Scheme: Each sensor node determines its own location independently. The distributed localization can be further grouped into: Range-based schemes and Range-free schemes

a) In the range-based approach, some range information, such as time of arrival, angle of arrival, or time difference of arrival is required.

b) Uses absolute point to point distance estimates for calculating the location.

• Diffusion: In diffusion the most likely position of the node is at the centroid of its neighboring known nodes. APIT requires a high ratio of beacons to nodes and longer range beacons to get a good position estimate. For low beacon density this scheme will not give accurate results.

• Bounding box: Bounding box forms a bounding region for each node and then tries to refine their positions. The collaborative multilateration enables sensor nodes to accurately estimate their locations by using known beacon locations that are several hops away and distance measurements to neighboring nodes. At the same time it increases the computational cost also.

• Gradient: Error in hop count distance matrices in the presence of an obstacle.

ii. Relaxation-based distributed algorithms: The limitation of this approach is that the algorithm is susceptible to local minima.

iii. Coordinate system stitching based distributed algorithms: The advantage of this approach is that no global resources or communications are needed. The disadvantage is that convergence may take some time and that nodes with high mobility may be hard to cover.

iv. Hybrid localization algorithms: The limitation of this scheme is that it does not perform well when there are only few anchors.