The architecture of evolved UMTS Terrestrial Radio Access Network (E-UTRAN) has been illustrated below. 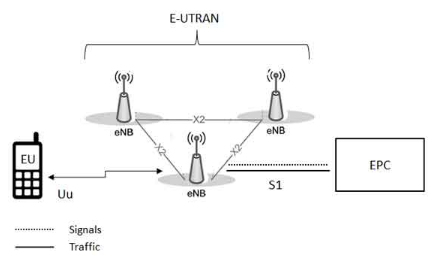 LTE Mobile communicates with just one base station and one cell at a time and there are following two main functions supported by eNB:

• The eBN sends and receives radio transmissions to all the mobiles using the analogue and digital signal processing functions of the LTE air interface.

• The eNB controls the low-level operation of all its mobiles, by sending them signalling messages such as handover commands.

• Each eBN connects with the EPC by means of the S1 interface and it can also be connected to nearby base stations by the X2 interface, which is mainly used for signalling and packet forwarding during handover.