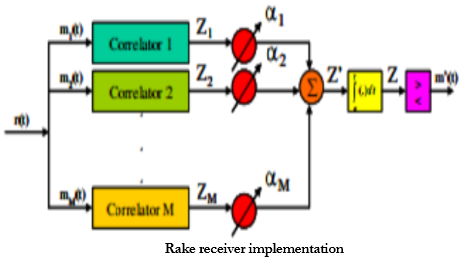 The dictionary meaning of rake is to gather or collect together something and actually is a garden tool to collect leaves. But in the terms of computer network, it is for the purpose of collecting signals from multiple paths arriving at the receiver end and used specially in CDMA cellular systems.

A Rake Receiver is a radio receiver which is designed for the purpose to counter the effects of multipath fading. Due to reflections from multiple obstacles in the environment, the radio channel can consist of multiple copies of the transmitted signal having different amplitude, phases or delays.

A rake receiver can resolve this issue and combine them. For this purpose, several sub-receivers are used which are known as “fingers”. The idea of a basic rake receiver was first proposed by Price and Green.

When the transmitter transmits the signal then it travels through the environment which consists of various obstacles and the transmitted signal is reflected by them and is received by the rake receiver from multiple paths. Rake receiver then feeds them to different fingers (correlators). The delays in each received signal are compensated and are feeded to the Combiner, Integrator and Comparator which combines them suitably with different appropriate time delays.

Application: Compensates with the multipath fading occurring in CDMA and W-CDMA.