0
Draw the block diagram of PAL TV receiver and explain the working and functions of each block.

PAL receiver consists of five sections as shown in the below figure. 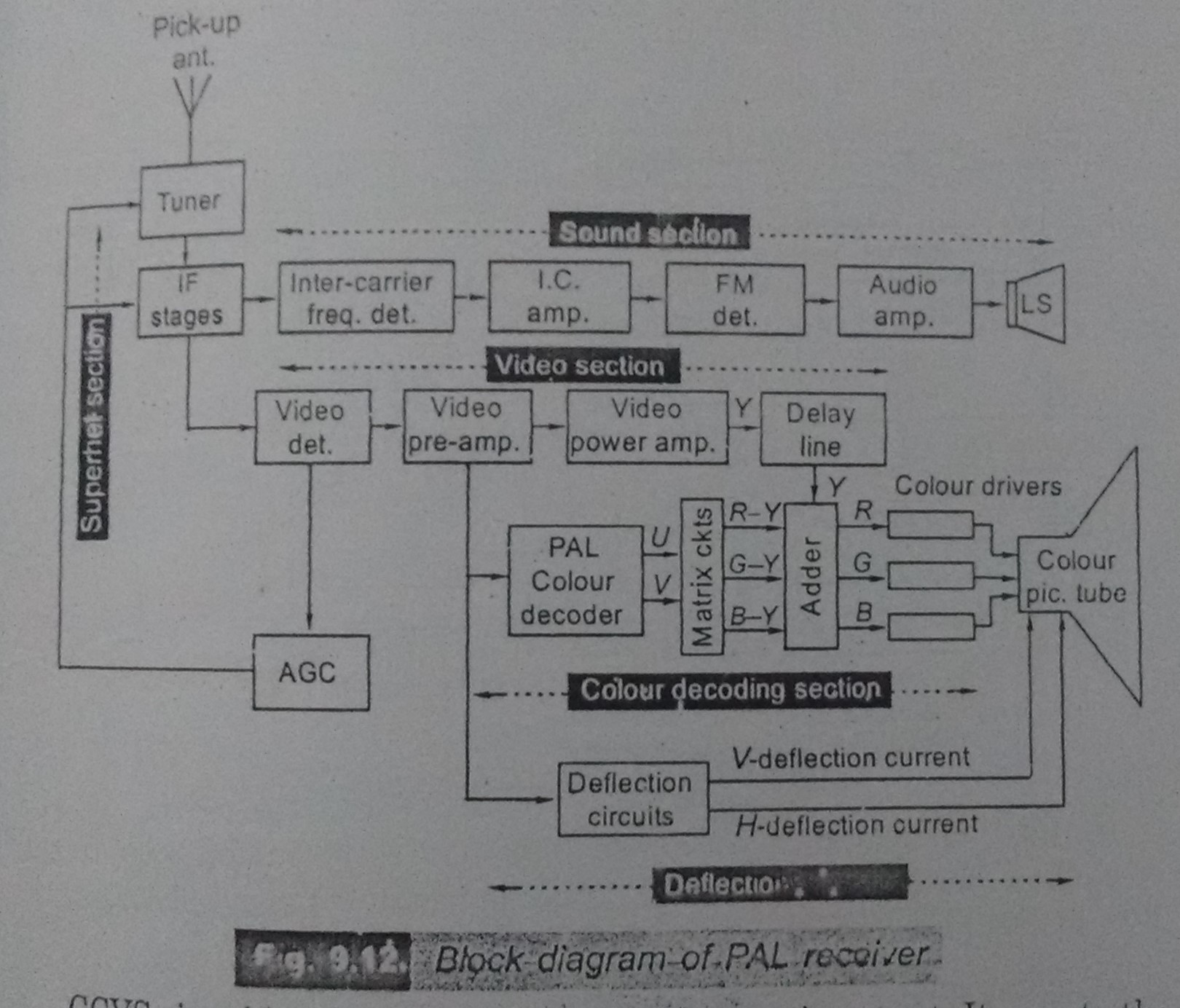 • It is similar to the super-heterodyne section in a monochrome receiver except that the inter-carrier frequency signal is taken out (for sound section) from the last IF stage instead of from the output of the detector or video pre-amplifier.

• The reason for this is to save the picture from the beat signal produced by mixing chroma signal (3.58MHz) with inter-carrier frequency (4.5MHz).

• Beat of the two signals would be 920 kHz in NTSC system which falls within the video bandwidth and would cause interference known as sound in picture.

• Video detector recovers CCVS signal. Luminance signal (Y) is amplified and is delayed by a delay line so that it reaches the adder simultaneously with the chroma signal.

• Chroma signal propagated slowly in the colour decoder circuit due to lower bandwidth and hence Y signal has to be delayed.

• CCVS signal is available at the video detector’s output. It goes to the video pre-amplifier which amplifies the CCVS signal.

• Y signal is separated from C signal either by using a comb filter or preferably by a simple bandpass filter to pass a bandwidth of 3.13MHz.

Block diagram of S-PAL colour decoder is shown in the figure below: 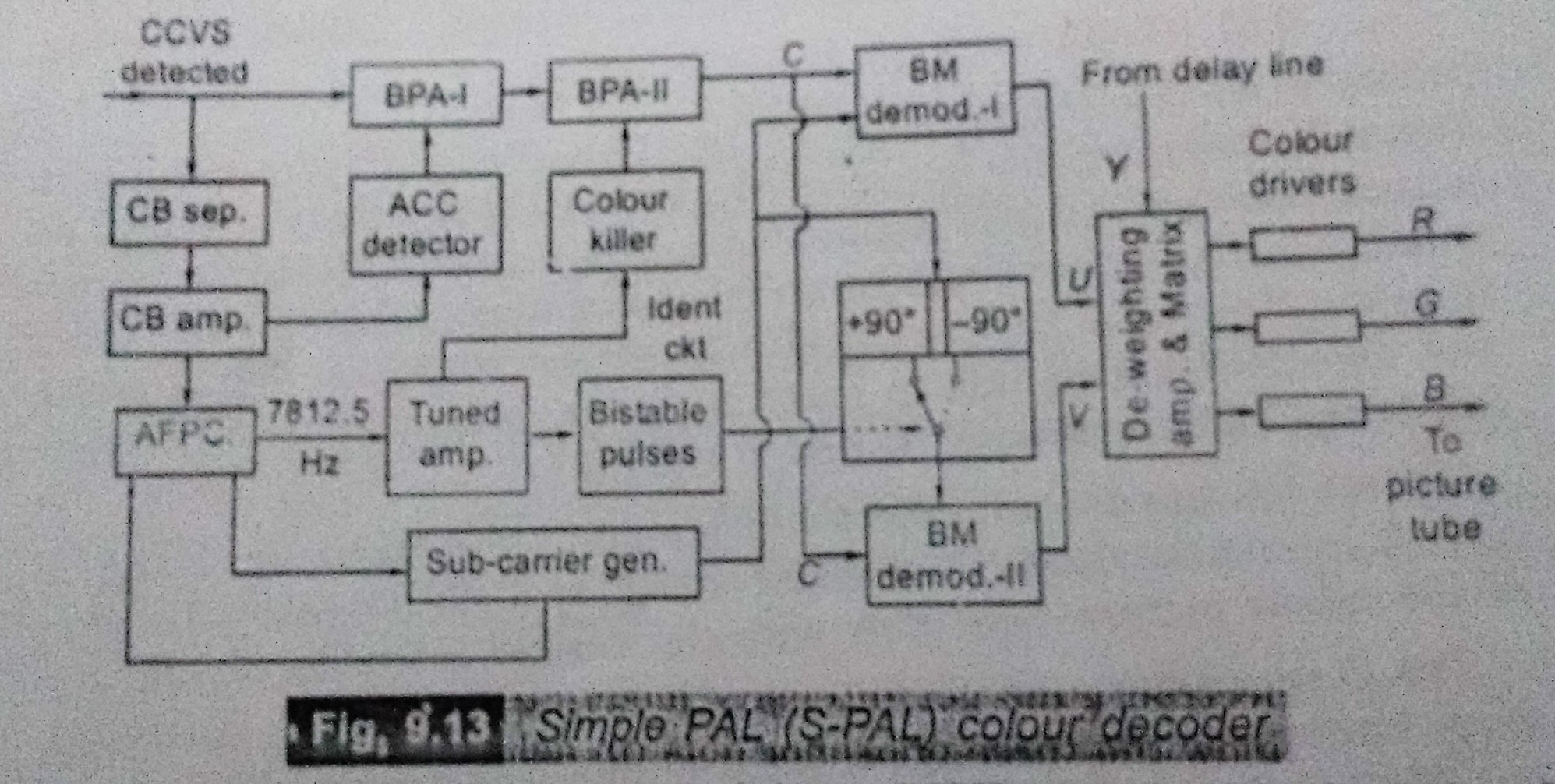 • Chroma signal (C) is extracted from CCVS signal with the help of bandpass filters and amplifiers in stages, BPA-I and BPA-II.

• Chroma signal is duly amplified by bandpass filters and is fed to two detectors (BM-I and BM-II) of the balanced modulator type.

• The subcarrier generator generates 4.43MHz signal which is correctly synchronized to the one used in the transmitter with the help of colour burst (CB) signal and automatic frequency and phase control circuit (AFPC).

• The CB signal is separated out from the CCVS signal by a CB separator stage which uses a class C amplifier.

• The subcarrier signal also is fed to two balanced modulators (BM-I and BM-II). To BM-I, it goes with zero phase but to BM-II its phase changes by 90 degree for out line and -90 degree for the next line with the help of an automatic electronic switch controlled by pulses produced by a bi-stable multi-vibrator.

• The detection is synchronous or coherent. Hence BM-I detector detects U signal as phase of U as well of the subcarrier is zero. It does not detect V signal because V signal’s phase is 90 degree.

The problem of cross-interference between U and V signals in the coherent detector’s output is solved by using a delay circuit before the BM detectors as shown in the circuit given in the figure below. This circuit is called D-PAL decoder circuit and is used in all modern PAL receivers. D stands for delay line used to delay the signal by 64µs. 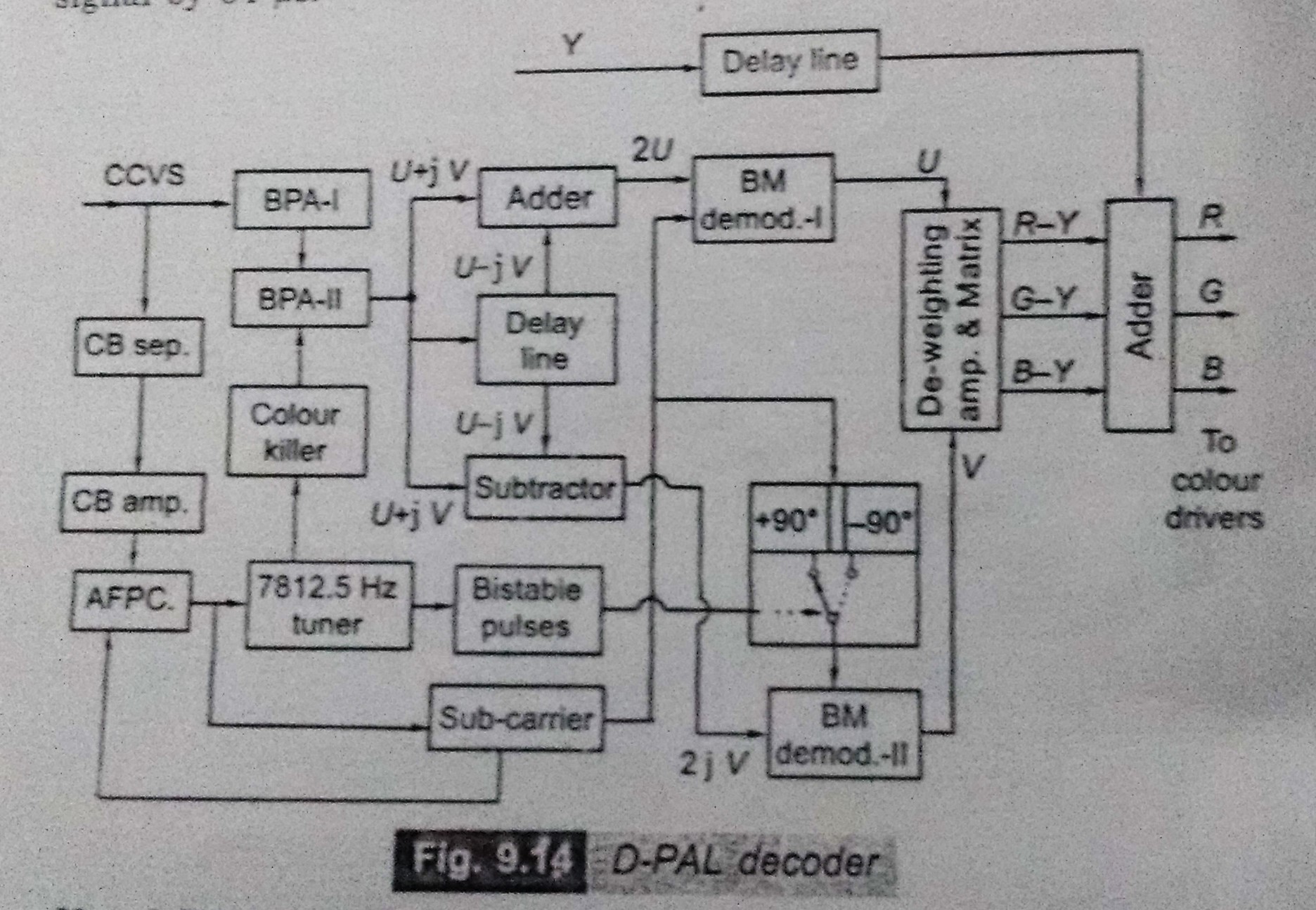 • Deflection circuits for colour receiver are similar to that in a monochrome system except that additional currents for removing pincushion effect are made available for the deflection yoke.

• Colour picture tube required for this section is totally different from the monochrome picture tube.

• The three signals duly amplified are fed to the input of the three electron guns of the colour picture tube.

• The three beams coming out of the electron guns get intensity modulated by the three colour signals and glow the three phosphor dots (in delta picture tube) or three stripes (in PIL picture tube).

• The eye preforms additive mixing of the three colours and therefore sees the original colour of the picture which has been transmitted.