TOTAL MARKS: 100
TOTAL TIME: 3 HOURS (1) Question 1 is compulsory.
(2) Attempt any four from the remaining questions.
(3) Assume data wherever required.
(4) Figures to the right indicate full marks. 1 (a) Find the natural frequency of a half solid cylinder of a mass 'm' and radius 'r' when it is displaced from the equilibrium position and released as shown in Fig. 1. 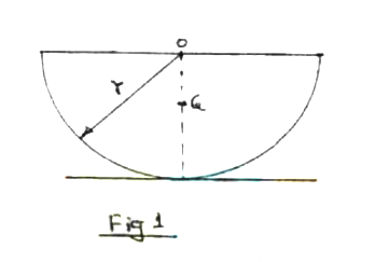 (10 marks) 1 (b) Using Newton's second law of motion find the natural frequency of vibration of a spring-mass system arranged on inclined plane as shown in Fig. 2. 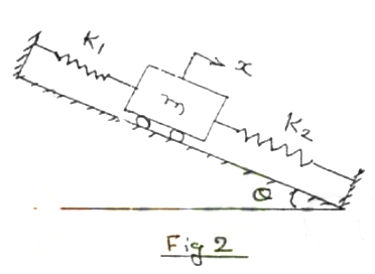 (10 marks) 2 (a) A 35 kg block is attached to a spring of stiffness 1.7×105 N/m. Coefficient of friction between the block and surface on which it slides is 0.11. The block is displaced 10 mm from equilibrium and released i) what is amplitude of motion at the end of first cycle? How many cycles of motion occurs?(9 marks) 2 (b) A rotor of mass moment of inertia 2.5 kg m2 is to be attached at the end of a 60 cm circular steel shaft (G=80×109 N/m2). What is the range of shaft diameter such that the torsional frequency of the system is between 100 and 200 Hz,(8 marks) 2 (c) Explain the terms:
i) Peak Amplitude
ii) Peak Frequency(3 marks) 3 (a) All the natural of the system shown in Fig. 3, exist below 2 rad/sec. Find all the natural frequencies and draw mode shapes. m=1kg, K=1N/m

(14 marks) 3 (b) How is the critical speed of the shaft determined.(6 marks) 4 (a) How do you find the response of a viscously damped system under rotating unbalanced?(10 marks) 4 (b) A machine of mass 50 kg operates at 1200 rpm. Find the maximum stiffness of an isolator that provides 75 percent isolation. Assume that damping ratio of the isolator is 7 percent.(10 marks) 5 (a) A spring mass damper system, having an undamped natural frequency of 100 Hz and a damping constant of 20 N-s/m, is used as an accelerometer to measure the vibration of a machine operating at a speed of 3000 rpm. If the actual acceleration is 10 m/s2 and the recorded acceleration is 9 m/s2, find the mass and the spring constant of accelerometer.(10 marks) 5 (b) Use Lagrange's equation to derive the differential equations governing the motion of the system, using x1 and x2 as generalised coordinates. Assume the disc of mass m and radius r rolls without slip.

(10 marks) 6 (a) Four pulleys are equally spaced along a shaft and each has an out of balance mass at the same radius. The out of balance mass in second pulley is 3 kg and third and fourth out of balance masses are at 72° and 220° to it. Determine the masses in the first, third and fourth pulleys and also the angle of the first mass relative to second. If the complete balance is to be obtained.(10 marks) 6 (b) Explain vibration based condition monitoring and fault diagnosis in rotating machine.(5 marks) 6 (c) Explain the balancing of V-engine.(5 marks)
question paper mechanical engineering (semester 6) mechanical vibrations mu • 1.4k  views
0
ADD COMMENT