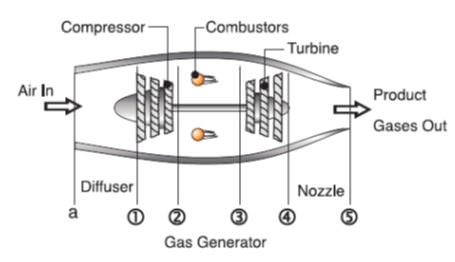 The schematic diagram of the turbojet engine is shown in fig above.

The turbojet engine basically comprises of components such as diffuser, compressor, combustor, gas turbine and a set of nozzles.

Atmospheric air at aircraft velocity enters the diffuser at point a. The diffuser converts the kinetic energy of the air into pressure energy and the compression taking place is called as ram compression.

Again the air is further compressed in the compressor. This pressurized air is then passed through the combustors where the fuel is burnt at constant pressure. During this process, the temperature of the gases increases.

The products of combustion then expand over the gas turbine up to a pressure such the turbine develops power which is capable of driving the compressor and the rest of the auxiliaries.

The pressure of the gases at the outlet of the gas turbine is above the atmospheric. Thus, these gases finally expand in the nozzles up to surrounding pressure.

Velocity of gases at the exit is much higher when compared to inlet velocity of air. Thus the thrust produced due to the rate of change of momentum and its reaction generates the necessary propulsive force to propel the jet engine in the forward direction.

At higher speeds the turbojet has higher propulsive efficiency which are suitable to aircrafts travelling at speeds higher than 800kmph.