Cohesion is a natural extension of the information hiding concept. A cohesive module performs a single task within a software procedure, requiring little interaction with procedures being performed in other parts of a program. Cohesion may be represented as a "spectrum." We always strive for high cohesion, although the mid-range of the spectrum is often acceptable. The scale for cohesion is nonlinear. 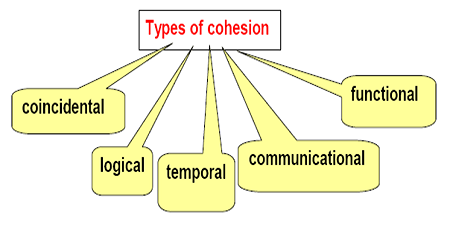 This occurs when there is no relationship among elements of a module. They can occur if an existing program modularized by chopping it into pieces and making differ piece of modules i.e. it performs a set of tasks that are related to each other very loosely. The modules contain a random collection of function.

It is same as logical cohesion except that the element must be executed in same time. Set of function responsible for initialization, startup, the shutdown of the same process. It is higher than logical cohesion since all elements are executed together. This avoids the problem of passing the flag.

A module is said to have Communicational cohesion if all function of module refers to an update the same data structure.

It is the strongest cohesion in a functional bound module, all elements of the module are related to performing a single function. By function we not mean simply mathematical function but also these modules which have single goal function like computing square root and sort array are a clear example of functionality cohesion modules.

Coupling:- Coupling is a measure that defines the level of inter-dependability among modules of a program. It tells at what level the modules interfere and interact with each other. The lower the coupling, the better the program.

There are five levels of coupling are:-

• Common coupling- When multiple modules have read and write access to some global data, it is called common or global coupling.

• Control coupling- Two modules are called control-coupled if one of them decides the function of the other module or changes its flow of execution.

• Message Coupling: This type of coupling can be achieved by the state decentralization. It is the loosest type of coupling, in which the component communication is performed through message passing.

• Stamp coupling- When multiple modules share common data structure and work on different part of it, it is called stamp coupling.

• Data coupling- Data coupling is when two modules interact with each other by means of passing data (as parameter). If a module passes data structure as parameter, then the receiving module should use all its components.