The general procedures for applying translation, rotation, and scaling Parameters to reposition and resize the two dimensional objects.

Translation is a process of changing the position of an object in a straight-line path from one coordinate location to another.We can translate a two dimensional Point by adding translation distances tx and ty, to the original coordinate position (x, y) to move the point to a new position (x’, y’) as shown in the figure (a). 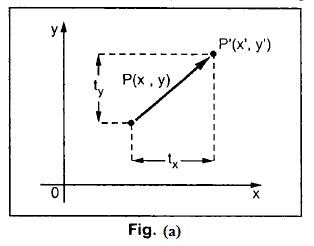 It is possible to express the translation equations 1 and 2 as a single matrix equation by using column vectors to represent coordinate Positions and the translation vector:

A two dimensional rotation is applied to an object by repositioning it along a circular path in the xy plane. To generate a rotation we specify a rotation angle θ and the position of the rotation point about which the object is to be rotated. 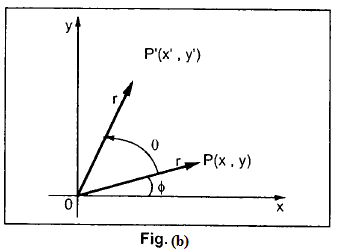 Substituting equations (5) into (4), we get the transformation equations for rotating a point (x, y) through an angle θ about the origin as :

Where R is rotation matrix and it is given as

For negative values of θ i.e., for clockwise rotation, the rotation matrix becomes

A scaling transformation changes the size of an object.This operation can be carried out for polygons by multiplying the coordinate values (x, y) of each vertex by scaling factors Sx and Sy,to Produce the transformed coordinates (x’, y’) 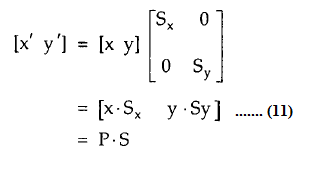 Any Positive numeric values are valid for scaling factors Sx and Sy. Values less than 1 reduce the size of the objects and values greater than 1 produce an enlarged object. For both Sx and Sy, values equal to 1,the size of object does not change. To get uniform scaling it is necessary to assign same value for Sx and Sy. Unequal values for Sx and Sy, result in a differential scaling.