Prandtl’s mixing length theory is a 2-Dimensional model attempting to describe the momentum transfer within a turbulent fluid flow.

Mixing length is defined as that distance in the transverse direction which must be covered by a lump of fluid particle travelling with its original mean velocity in order to make the difference between its velocity and the velocity of the new layer equal to the mean transverse fluctuation in the turbulent flow.

OR simply It can be defined as the average distance that a small mass of fluid will travel before it exchanges its momentum with another mass of fluid.

The concept of mixing length is similar to the mean free path used in kinetic theory of gases. Prandtl proposed that when there is mixing between two fluid elements; there is complete exchange of momentum.

Note: Theory for understanding the concept:

The lower mass has an instantaneous velocity $u ̅$and a velocity fluctuationv'.

The upper mass has an instantaneous velocity $u ̅+u'$but it does not have any velocity fluctuation in the Y direction.

By virtue of velocity fluctuation v' the lower mass moves towards the upper mass and exchanges its momentum completely.

For the lower mass:

The initial velocity= $u ̅$

This is called Turbulent Reynolds stress. 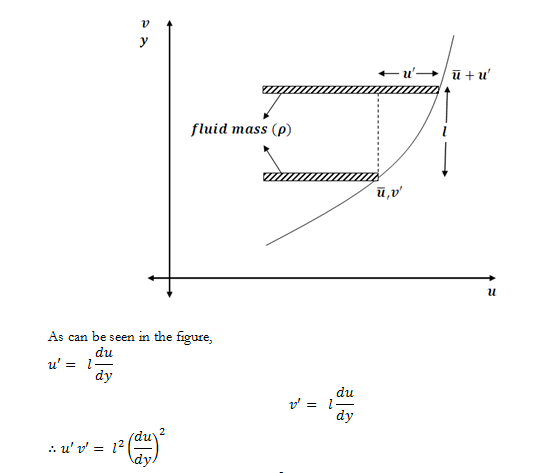