A DC/DC converter that stabilizes the voltage is often referred to as a voltage regulator. 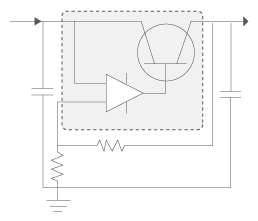 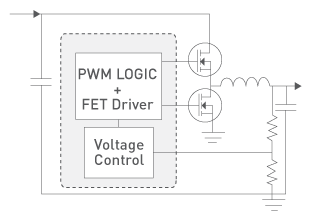 | | A linear regulator is one where a linear component (such as a resistive load) is used to regulate the output.| A switching regulator is a voltage regulator that uses a switching element to transform the incoming power supply into a pulsed voltage, which is then smoothed using capacitors, inductors, and other elements.| |It is also called as a series regulator because the control elements are arranged in series between the input and output.|| |The regulator’s resistance varies according to the load and results in a constant output voltage.|Power is supplied from the input to the output by turning ON a switch (MOSFET) until the desired voltage is reached. Repeating this operation at high speeds makes it possible to supply voltage efficiently and with less heat generation.The switch’s duty cycle sets the amount of charge transferred to the load. | | Linear regulators require an input voltage at least some minimum amount higher than the desired output voltage. That minimum amount is called the dropout voltage | They store the input energy temporarily and then releasing that energy to the output at a different voltage level.| | Only step-down (buck) operation is possible | Boost / buck / negative voltage operation is possible | | Linear regulators are normally inefficient because the difference between the input voltage and regulated output voltage is continually dissipated as heat.|Switching regulators are efficient because the series element is either fully conducting or switched off so it dissipates almost no power.| |It has simple circuit configuration with few external parts and hence low cost design| It requires more external parts and its design is a bit complicated and expensive | | Low noise operation | Switching operation makes it noisy | |Linear regulators are a great choice for powering very low powered devices or applications where the difference between the input voltage and output voltage is small | Switching regulators caters to today's applications which demand low power consumption under various load conditions, less space, high reliability, high efficiency and low quiescent current |