Internetworking is the practice of connecting a computer network with other networks through the use of gateways that provide a common method of routing information packets between the networks. The resulting system of interconnected networks are called an internetwork, or simply an internet. Internetworking is a combination of the words inter ("between") and networking not internet-working or international-network. 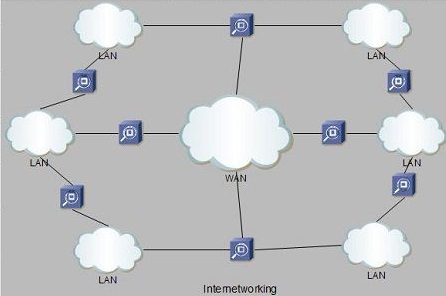 The smallest amount of effort to create an internet (an internetwork, not the Internet), is to have two LANs of computers connected to each other via a router. Simply using either a switch or a hub to connect two local area networks together doesn't imply internetworking; it just expands the original LAN.

There are three variants of internetwork or Internetworking, depending on who administers and who participates in them :