0
1.1kviews
What are the various types of Storage Models? 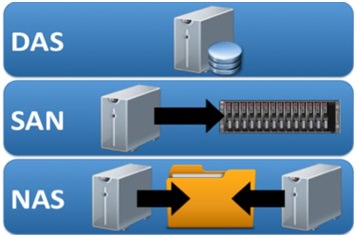 Direct attached storage is the simplest storage model. We are all familiar with DAS; this is the model used by most laptops, phones, and desktop computers. The fundamental unit in DAS is the computer itself; the storage for a server is not separable from the server itself. In the case of a phone it is physically impossible to remove the storage from the compute, but even in the case of servers, where it is theoretically possible to pull disk drives, once a drive is separated from the server, it is generally wiped before reuse. SCSI and SATA are examples of DAS protocols.

Eventually the storage industry recognized the utility of separating storage from the compute. Rather than attaching disks to each individual computer, we placed all the disks on a single cluster of servers and accessed the disk over the network. This simplifies storage management tasks such as backup and failure repair. This division of storage and compute is often called shared storage, since multiple computers will use a single pool of storage. In a SAN an administrator will group a set of disks (or a portion of a set of disks) into a LUN (logical unit), which then behaves like a single disk drive to outside computers. The LUN is the fundamental unit used to manage SAN storage.