1) Whenever a body is under tensile load or compressive load it experiences a direct stress. When the body under goes plastic deformation, the crystal structure gets deformed.

2) Due to this deformation layers begins to slip over each other and this slip occurs along slip plane. 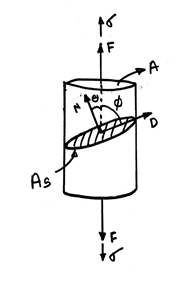 6) Resolving force F along the plane FD = F cos Ф,

The tensile stress on cylinder is σ = F/A and 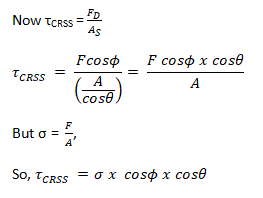 This is the maximum critically resolved shear stress for slip deformation phenomenon.