An entity set that does not have a primary key is referred to as a weak entity set.

We depict a weak entity set by double rectangles.

We underline the discriminator of a weak entity set with a dashed line.

a. payment-number: discriminator of the payment entity set 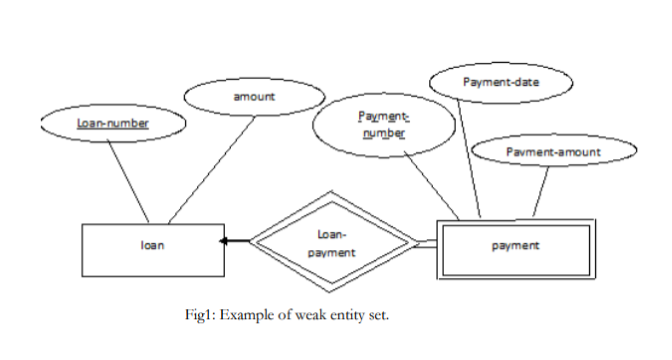 Note: the primary key of the strong entity set is not explicitly stored with the weak entity set, since it is implicit in the identifying relationship.

It means changes made by DML command are not permanent to database, it can be rolled back.

Insert command is used to insert data into a table.

Update command is used to update a row of a table.

A foreign key is a field (or collection of fields) in one table that uniquely identifies a row of another table. In simpler words, the foreign key is defined in a second table, but it refers to the primary key in the first table.

A foreign key is a column or group of columns in a relational database table that provides a link between data in two tables.

It acts as a cross-reference between tables because it references the primary key of another table, thereby establishing a link between them.

A super key is defined in the relational model of database organization as a set of attributes of a relation variable for which it holds that in all relations assigned to that variable, there are no two distinct tuples (rows) that have the same values for the attributes in this set.

Equivalently a super key can also be defined as a set of attributes of a relation schema upon which all attributes of the schema are functionally dependent.

A super key is a set of fields that contains a key.

Consider the example where the combination of "user_id" and "pet_id" uniquely identifies a tuple if we added "pet_name" (which is not key because we can have multiple pets named "fluffy") it would be a super key. Basically it's like a candidate key without the "minimal subset of fields" constraint.