0
2.9kviews
Explain mobile call termination in GSM detailing the need and the use of MSRN, IMSI, TMSI nos.

When a station calls a mobile station, we can term it as a Mobile Terminated Call (MTC). For e.g. when a call is made from a MTNL landline to an Airtel mobile phone we call it as an MTC.

The mobile terminated call set-up is described below.

• Initially the user dials the mobile number. It reaches the PSTN/ISDN/Switching office where it is identified as a GSM call (by the destination code mentioned) and forwards it to the gateway MSC i.e. GMSC.

• The GMSC identifies the HLR for the subscriber (which is coded in the phone number) and signals the call set-up to the HLR.

• The HLR then checks if the number is a valid number and whether that user has subscribed to this particular service. If so then an MSRN (Mobile Subscriber Roaming Number) is requested from the subscriber’s current VLR.

• After receiving the MSRN, the HLR determines the MSC responsible for the mobile station and sends this information to the GMSC.

• The GMSC then forwards the call setup request to the concerned MSC.

• Now the MSC initiates paging in all cells it is responsible for (i.e location area). It searches in all cells as finding the exact cell would be time consuming.

• If any response is found by any BTS, the VLR performs a security check (encryption etc.). The VLR then asks the MSC to connect to the MS.

• A Mobile Station Roaming Number (MSRN) is a telephone number used to route telephone calls in a mobile network from a GMSC to the target MSC.

• It can also be defined as a directory number temporarily assigned to a mobile for a mobile terminated call.

• A MSRN is assigned for every mobile terminated call, not only but also when the calls where the terminating MS lives on a different MSC than the originating MS.

• It is not possible to define routing information in all exchanges for each and every individual subscriber in the world.

• The International Mobile Subscriber Identity or IMSI /ˈɪmziː/ is used to identify the user of a cellular network and is a unique identification associated with all cellular networks.

• It is sent by the phone to the network. It is also used for acquiring other details of the mobile in the home location register (HLR) or as locally copied in the visitor location register. . • The carrier on its part does an IMSI analysis which is the process of examining a subscriber's IMSI to identify the network the IMSI belongs to, and whether subscribers from that network may use a given network (if they are not local subscribers, this requires a roaming agreement).

• The Temporary Mobile Subscriber Identity (TMSI) is a temporary identification number that is used in the GSM network instead of the IMSI to ensure the privacy of the mobile subscriber.

• The TMSI prohibits tracing of the identity of a mobile subscriber by interception of the traffic on the radio link.

• The TMSI is assigned to a mobile subscriber by the Authentication Centre (AUC) for the duration that the subscriber is in the service area of the associated Mobile Switching Centre (MSC).

• MS identifies itself by the Temporary Mobile Subscriber Identity (TMSI).

• It’s used mainly as an alias for IMSI ( due to security concerns as well as connectivity issues). 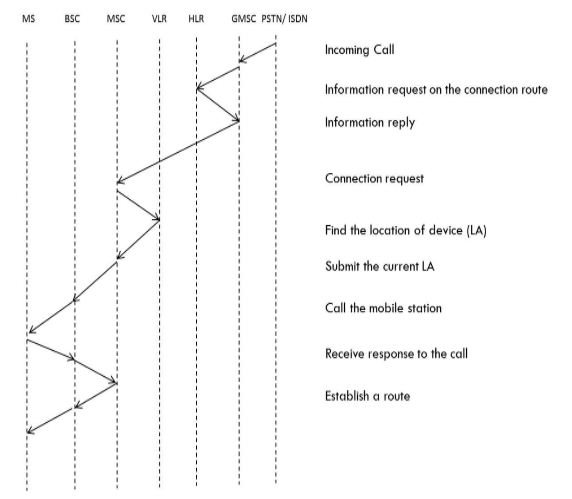