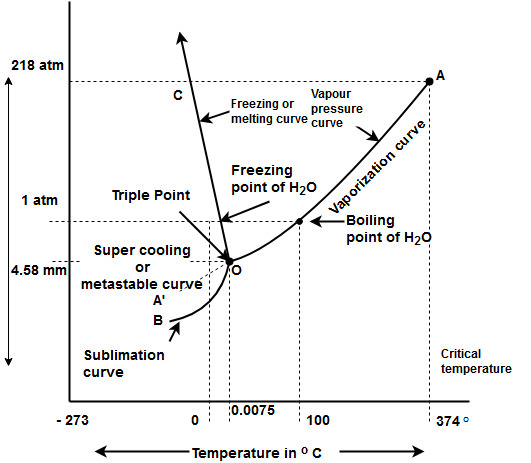 Since H2O is the only chemical compound involved.

Therefore it is single or one component system.

The three different cases are possible

From above,it is clear that for any one component system, the maximum number of degrees of freedom is two

Such a system can be represented completely by a two dimensional diagram.

The most convenient variables are the pressure and temperature.

Vapor pressure is 1 atm. The corresponding temperature in degree centigrade is the Boiling point of water

ii).$\underline{Curve \ OB}$:It is sublimation curve. The curve OB terminates at B, the absolute zero -2730C temperature. It shows vapor pressure of solid ice at different temperature.

The curve OC terminates at C, the critical pressure.

The two phase's solid-ice & liquid-water coexist in equilibrium. The curve indicates melting point of Ice decreases with increases in pressure. At one atm. Line meets the curve at $0^{\circ}c$. ....F=1 & system is monovariant.

The area AOC, AOB & BOC The curve or areas between the curves show the conditions at temperature & pressure under which a single phase i.e, ice, water & water vapor is capable of stable existence.

Hence each system has two degree of freedom i.e. system is bivariant or divariant.

$\underline{TRIPLE \ POINT}$: All the three curve OA, OB & OC meet at pt O called as triple point, where all the three phases solid, liquid & vapor are in simultaneously in equilibrium.

Since there are three phases & one component,

This curve is also known as super coding (water/vapors)curve.

This is extension of curve OA i.e. vapors pressure curve. That is, water can be super cooled by eliminating solid particles carefully which includes crystallization. The super cooled water system is unstable i.e. metastable,