Lead silver system- This system has two component and four phases. These are

But the boiling point of Ag and Pb is completely high; the vapor phase is completely absent.Since the press has nearly no affected on equilibrium so the system can be conveniently represented by temp.-conc. diagram.

Such solid liquid system with the gas phase is absent is called condensed system.

The experimental measurements of temp and conic. in condensed system ate usually carried at under atmosphere pressure.

Since the degree of freedom in such system is reduced but one, therefore, it can be also termed as reduced phase and represented by the equation, 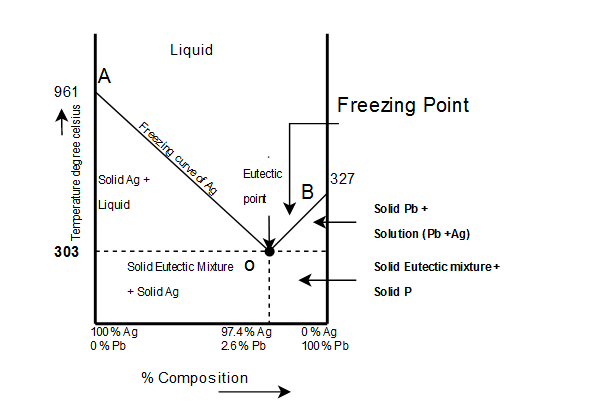 From the figure following salient features are observed:

On cooling the whole mass crystallizes out as such.

The two curve AO and BO meet at O, where three phases solid Ag, solid Pb and their solution coexist and according phase rule. The point of O represents a fixed composition of Ag $-2.6%, Pb-9.7%$ is called eutectic composition.

At eutectic composition ^ temperature remains constant until the whole of melt solidifies in block to become solid of eutectic composition. However, further cooling results in simultaneous crystallization of a mixture of Ag and Pb in relative amounts corresponding to eutectic point O.

It represents solution of Pb-Ag sample of Pb containing less than 2.6% Ag is taken at an arbitrary pt. on curve allowing mass cool temp gradually falls without any charge in composition till this point is reached to curve BO(pt may be P).

On lowering the temp lead begins to separate out of the composition varies along Pb till pt 0 is reached.On cooling whole mass solidifies into a block.

1). Used in Pattison's process of desilverization of Pb.

If Pb is more than 2.6 Ag will separate out from