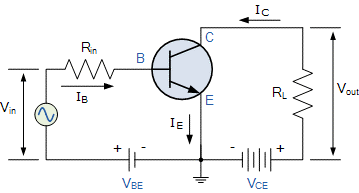 As the load resistance ( $R_L$ ) is connected in series with the collector, the current gain of the common emitter transistor configuration is quite large as it is the ratio of $\frac{I_c}{I_b}$. A transistors current gain is given the Greek symbol of Beta, ( β ).

As the emitter current for a common emitter configuration is defined as $I_e = I_c + I_b$, the ratio of Ic/Ie is called Alpha, given the Greek symbol of α. Note: that the value of Alpha will always be less than unity.

Since the electrical relationship between these three currents, Ib, Ic and Ie is determined by the physical construction of the transistor itself, any small change in the base current ( $I_b$ ), will result in a much larger change in the collector current ( $I_c$ ).

By combining the expressions for both Alpha, α and Beta, β the mathematical relationship between these parameters and therefore the current gain of the transistor can be given as:

Then to summarise a little. This type of bipolar transistor configuration has a greater input impedance, current and power gain than that of the common base configuration but its voltage gain is much lower. The common emitter configuration is an inverting amplifier circuit. This means that the resulting output signal has a $180^0$ phase-shift with regards to the input voltage signal.