1. The exponential form of Fourier series of a continuous time periodic signals x(t) is given by,

The above equation is frequency domain representation of the signal x(t) as a sum of infinite series with each term in the series representing a harmonic frequency component.

2. When the signal x(t) is reconstructed with only N number of terms of the infinite series, the reconstructed signal exhibits oscillations. 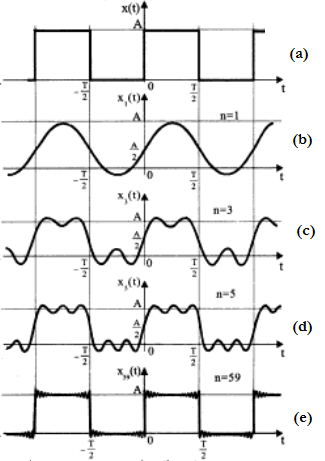 3. Consider a periodic square pulse signal shown in fig along with the reconstructed signal using N-terms of Fourier series.

6. Conditions for ROC of Fourier series :

Condition 2 = In any finite interval, x (t) is of bounded variation; that is no more than a finite number of maxima and minima during any single period of the signal.