Consider a flow over a curved surface as shown in fig 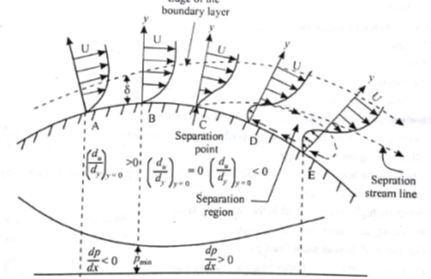 As the fluid flows round the surface (the area of flow decreases) it is accelerated over the left hand section until at point B the velocity just outside the boundary is maximum and the pressure is minimum (as shown by the graph below). Thus from A and B the pressure gradient is negative. As long as $\frac{dp}{dx}\lt0$ , the entire boundary layer moves forward.

Beyond B(i.e. along the region BCDE), the area of flow increases and hence velocity of flow decreases; due to decrease of velocity the pressure increases (in the direction of flow) and hence the pressure gradient $\frac{dp}{dx}$ is positive i.e. $\frac{dp}{dx}\gt0$. The value of the velocity gradient $(\frac{du}{dy})$ at the boundary layer is zero at the point C, this point is known as a separation point (the boundary layer start separating from the surface because further retardation of flow near the surface is physically impossible) large turbulent eddies are formed downstream of the point of separation. The disturbed region in which the eddies are formed is called turbulent wake.

Methods of preventing the separation of boundary layer:

Tripping the boundary layer from laminar to turbulent by provision of surface roughness.

Injecting the high velocity fluid in the boundary layer

Providing the slots near the leading edge.

Guidance of flow in a confined passage.

Providing a rotating cylinder near the leading edge.