The main purpose of this system is to make the machine noiseless by eliminating moving parts i.e. pump.

Ammonia is used as a refrigerant. Hydrogen, being the lightest gas, is used to increase rate of evaporation of liquid ammonia passing through the evaporator. This is used in the low pressure side of the system.

Water is used as solvent because it has ability to absorb ammonia readily.

The strong ammonia solution from absorber through heat exchanger is heated in generator by using an external source, usually a gas burner.

The ammonia vapours thereby produced are sent to condenser via a rectifier or water separator to remove water vapour carried with ammonia vapours. This is done because water vapours, if not removed, enter into evaporator and cause freezing and choking of machine.

The hot weak solution left behind in generator flows to the absorber through the heat exchanger where it gets cooled by giving away heat to the strong solution going to generator. This accelerates absorption and improves performance of plant. Ammonia vapours are condensed using external cooling source in the condenser. From here the liquid refrigerant flows under gravity to evaporator where it meets the hydrogen gas.

The hydrogen gas, fed to the evaporator, permits liquid ammonia to evaporate at a low pressure and temperature according to Dalton’s principle. Ammonia absorbs latent heat from refrigerated space during its evaporation, and thus produces cooling effect.

The ammonia vapour and hydrogen mixture is passed to absorber where ammonia is absorbed in water while hydrogen rises to top and flows back to evaporator. The coefficient of performance is given by: 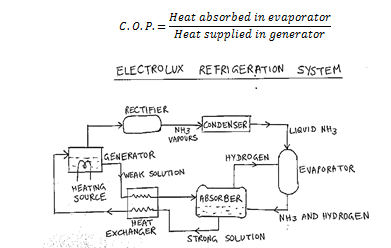