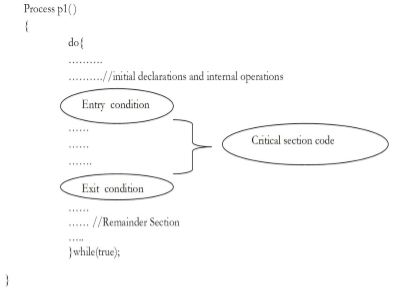 A solution to a critical section problem must satisfy three conditions;

b) Progress: If no process is currently in its critical section, then only those process which are currently not in its remainder section can participate in deciding who will enter the Critical section next.

c) Bounded waiting: There exists a bound with regards to the number of times other process can enter its critical section between when a process has requested for critical section and when that request is granted

The various solutions to it are:

Peterson’s solution is restricted to two processes that alternate execution between their critical sections and remainder sections. The processes are named P0 and P1. The Petersons solutions asks both the processes to share two data items

The algorithm for Peterson solution is: 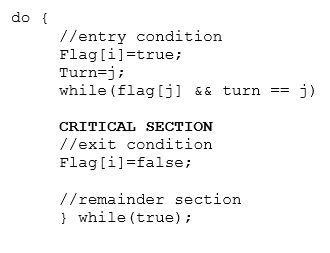 Many modern computer systems provide a special hardware instruction that allows us either to test and modify the content of a word or to swap the contents of two words atomically—that is, as one uninterruptible unit. It is implemented using either of the two instructions:

test_and_set( ): this instruction can be executed atomically. Therefore if two such instructions are executed simultaneously on a different PC, then it will be executed in some arbitrary order

compare_and_swap( ): it also operates atomically as a single uninterruptible unit. It operates on three operands unlike test_and_set and also returns the original value of the variable value

The hardware locks are generally inaccessible to application programmers; instead of it we use software tools-the simplest being mutex. It is short form for mutual exclusion. We use mutex lock to protect critical regions and thus avoid race conditions.

Every process will have to acquire a lock before entering the Critical section (using acquire ( ) function) and release the lock when exiting (using the release ( ) function) . Calls to the two functions mentioned above must be done atomically which is done by the hardware methods described in method (b) above.

Semaphores are similar to the mutex lock except that they are much robust and can provide sophisticated ways for the process to synchronize their activities. A semaphore S is an integer variable and can only be accessed and modified by two functions wait( ) and signal( ). It can be initialized to a non-negative value. The wait operation decrements the semaphore value while the signal operation increments the semaphore value