ALOHA was developed at the University of Hawaii. ALOHAnet became operational in June, 1971, providing the first public demonstration of a wireless packet data network.

Meaning It has been derived from a compound of the Hawaiian words: ALO means “share”. HA means “essence of life”.

There are two different versions of ALOHA:

Pure ALOHA and Slotted ALOHA both are the Random Access Protocols, that are implemented on the Medium Access Control (MAC) layer, a sublayer of Data Link Layer. The purpose of the ALOHA protocol is to determine that which competing station must get the next chance of accessing the multi-access channel at MAC layer.

The version of the protocol "Pure ALOHA" is quite simple:

The concept of "transmit later" is a critical aspect: the quality of the backoff scheme chosen significantly influences the efficiency of the protocol, the ultimate channel capacity, and the predictability of its behavior. 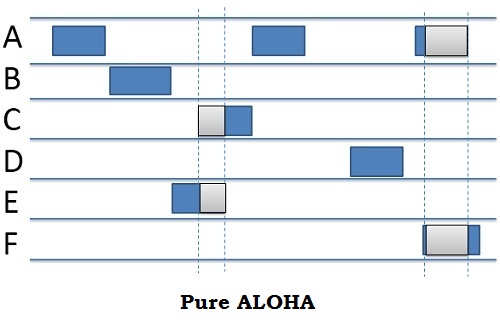 Slotted ALOHA was invented to improve the efficiency of pure ALOHA as chances of collision in pure ALOHA are very high.

In slotted ALOHA, there is still a possibility of collision if two stations try to send at the beginning of the same time slot

Slotted ALOHA still has an edge over pure ALOHA as chances of collision are reduced to one-half.

In this method it was proposed that the time be divided up into discrete intervals (T) and each interval correspond to one frame .i.e the user should agree on the slot boundaries and require each station to begin each transmission at the beginning of a slot.

Even if station is ready to send in middle of a slot, it must wait until the beginning of the next one. 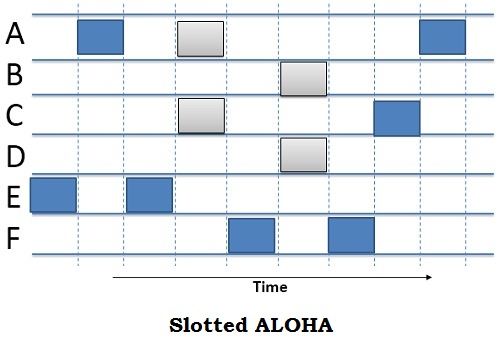