Joints shall be categorized as follows:

A] Movement Joints - A movement joint is intended to accommodate relative movement between adjoining parts of a structure, special provisions being made to maintain the water-2 tightness of the joint. In elevated structures where restraint is small, movement joints may not be required. There are three categories of movement joints:

1. Contraction joint - A movement joint with a deliberate discontinuity but no initial gap between the concrete on either side of the joint, the joint being intended to accommodate contraction of the concrete. 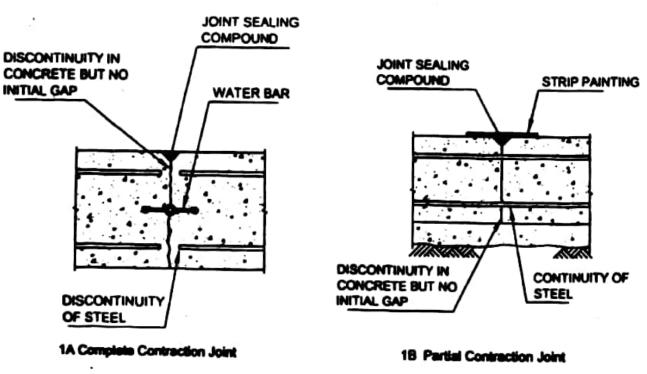 2. Expansion joint - A movement joint which has no restraint to movement and is intended to accommodate either expansion or contraction of the concrete. This has complete discontinuity in both reinforcement and concrete. An expansion type water bar shall be provided either centrally in a wall or the soffit of a floor. A centre-bulb water bar may be used in walls.

In general, such a joint requires the provision of an initial gap between the adjoining parts of a structure which by closing or opening accommodates the expansion or contraction of the structures. Design of the joint so as to incorporate sliding surface, is not, however, precluded and may some times be advantageous. 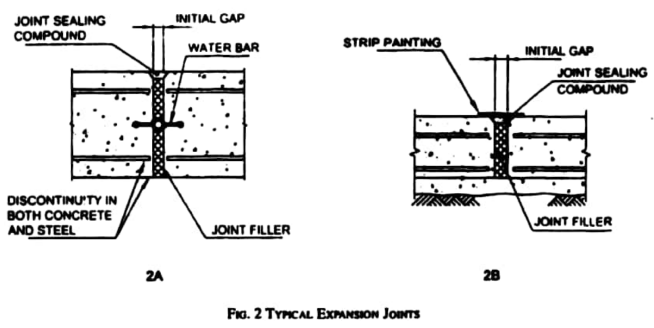 3. Sliding Joint - A movement joint which allows two structural members to slide relative to one another with minimal restraint. This has complete discontinuity in both reinforcement and concrete at which special provision is made to facilitate relative movement in the place of joint. 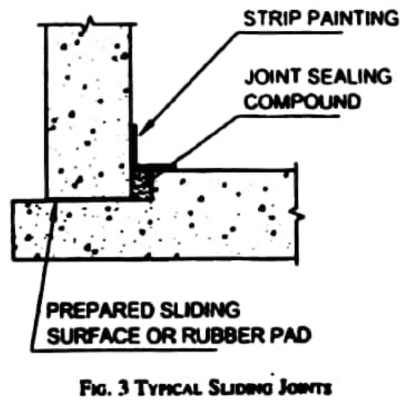 B] Construction Joints - A joint in the concrete introduced for convenience in construction at which special measures are taken to achieve subsequent continuity without provision for further relative movement, is called a construction joint.

The position of construction joints should be specified by the designer. The concrete at joints should be bonded properly. The surface of the earlier pour should be roughened to increase the bond strength and to provide aggregate interlock. For vertical surfaces, the surface retarder should be applied to the formwork. The laitance is removed by applying a jet of water. If the joint surface is not roughened before the concrete is hardened; the laitance should be removed by sand blasting or by scrabbler. The joint surface should be cleaned and dampened for at least six hours prior to placing new concrete.

C] Temporary Open Joints - A gap temporarily left between the concrete of adjoining parts of a structure which after a suitable interval and before the structure is put into use, is filled with concrete either completely or as provided in figure below, with the inclusion of suitable jointing materials.

Where measures are taken for example, by the inclusion of suitable jointing materials to maintain the water tightness of the concrete subsequent to the filling of joint, this type of joints may regarded as being equivalent to a contraction (partial or complete) as diameter and grade to steel carefully and bundling of reinforcement, if required, are available. 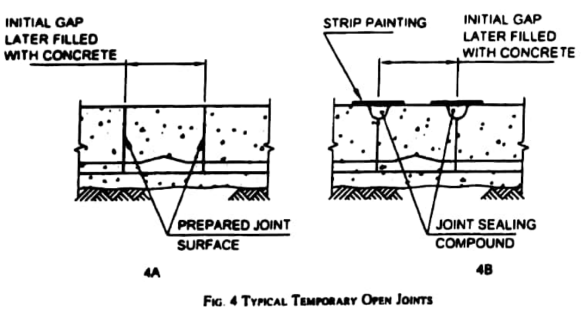