0
Explain in detail the packet and frame formats of CDMA IS 95 system.

The sync channel provides the MS info about the system indentification (SID), the network id (NID), PN, short sequence offset, the PN long code state o and the system time among other things. Such messages can be long and are fragmented into synch frames of 32 bits. 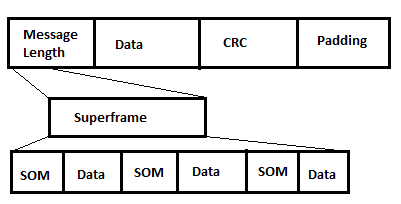 Three of sync channels are combined into sync channel superframe of 96 bits. The start of message is 1 for the first sync channel frame and zero for the subsequent ones the belong to the same message. The message itself consists of the message length, the data, and error checking code and some padding. Padding to ensure that every new message starts in a new superframe.

The paging channel announces a no. of parameters to MS that includes the traffic channel information, the temporary mobile subscription identity, response to access request and list of neighbouring base station and their parameters.

Paging can be slotted or unslotted. In the former cases, which enables the MS to save on battery power, the channel is divided into 80 ms slots. The paging channel msg is similar in structure to the sync channel message. Because it is too long for transmission in one slot, it is fragmented into 47 or 95 bits (data rate of 9600 or 4800 bps) and transmitted over a paging channel half frame (10ms).

The half frame has one bit called the synchronisation capsule indicator (SCI) that has functionality similar to the SOM bit. In this case however, a message can start anywhere (not necessarily in a half frame) and a zero value for the SCI could indicate that one paging message ends and another starts within the same half frame. Eight paging half frames are combined into one paging slot of 80 ms. 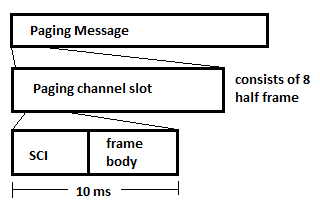 The reverse traffic channel is once again broken into 20 ms traffic channel frames. The frame is further divided into 1.25ms power control groups (PCGs). There are thus 16 PCGs in one frame. A data burst randomizer randomly masks out individual PCGs depending on the data rate that results in less interference on the reverse channel.