$I_G$ for a body depends on the body’s mass and the location of the mass. The greater the distance the mass is from the axis of rotation, the larger $I_G$ will be. For example, flywheels have a heavy outer flange that locates as much mass as possible at a greater distance from the hub. $I_G$ is the “mass moment of inertia” for a body about an axis passing through the body’s mass center, G. 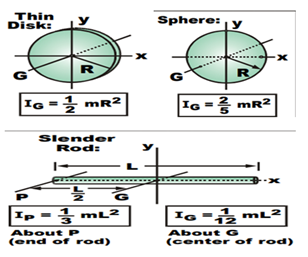 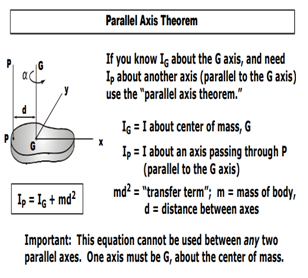 Radius of Gyration, $k_G$, for Complex Shapes Some problems with a fairly complex shape, such as a drum or multi-flanged pulley, will give the body’s mass m and a radius of gyration, $k_G$, that you use to calculate $I_G$. If given these, calculate $I_G$ from: $I_G = mk_G^2$ As illustrated below, using $k_G$ in this way is effectively modeling the complex shape as a thin ring. 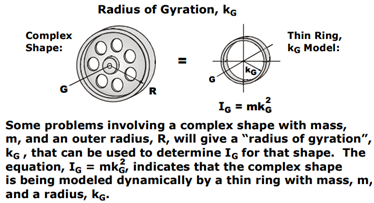 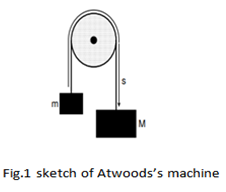 Consider rigid body acted upon by a system of forces. The system may be reduced to a single resultant force acting on the body whose magnitude is given by the product of the mass of the body and the linear acceleration of the center of mass of the body.

A little consideration will show, that if the quantity($–m.a$) be treated as a force, equal, opposite and with the same line of action as the resultant force F and include this force with the system of the forces of which F is the resultant, then the complete system of forces will be in equilibrium. This principle is known as D-Alembert's principle. The equal and opposite force (–$m.a$) is known as reversed effective force or the inertia force (briefly written as $F_I$).

Thus, D-Alembert's principle states that the resultant force acting on a body together with the reversed effective force are in equilibrium. This principle is used to reduce a dynamic problem into an equivalent static problem.

D’Alembert’s principle makes the venerable Atwood’s machine, illustrated in figure -1, trivial to analyze. The state of the machine is determined by the positions of the two masses along the U-shaped coordinate s looping over the frictionless pulley with the string. The work done by gravity on the left-hand mass under the displacement $δ-s$ is $δW_L = −mgδ_s$, while the gravity acting on the right-hand mass produces work $δW_R = +M_gδ_s$. The inertial work on the two masses gives $δW_I = −(M + m)(d^2s/dt^2 )δ_s$, resulting in

Note that the force of constraint by the pulley (which is assumed to be free to rotate but held rigidly in place and with negligible moment of inertia) does not enter the problem at all.

This technique is useful for solving statics problems, with static forces of constraint. A static Force of constraint is one that does no work on the system of interest, but merely holds a certain part of the system in place. In a statics problem there are no accelerations. We can extend the principle of virtual work to dynamics problems, i.e., ones in which real motions and accelerations occur, by introducing the concept of inertial forces. For each parcel of matter in the system with mass m, Newton’s second law states that F = ma

If we define kinetic energy as $KE= \frac{1}{2}mv^2$ the result is the work-energy principle, the work done in changing the state of motion of an object is equal to the change in the kinetic energy.

This relationship is not anything which is not contained in Newton's laws, it is a restatement in terms of energy, and makes many problems much easier to solve.

It is potential energy, because it can be turned into actual kinetic energy. Potential energy is only meaningfully defined as a change when an object moves from one position to another. $∆PE_{Grav}=mg(y_2− y_1)=mgh$ Work and potential energy.