One of the most common forms of the constraint mechanisms is that it permits only relative motion of an oscillatory nature along a straight line. The mechanisms used for this purpose are called straight line mechanisms. These mechanisms are of the following two types:

1. In which only turning pairs are used, and

2. In which one sliding pairs are used,

The principle of working of an accurate straight line mechanism is based upon the simple geometric property that the inverse of a circle with reference to a pole on the circle is a straight line. Thus, referring to Figure 2.1 , if straight line $OAB$ always passes through a fixed pole O and the points A and B move in such a manner that : $OA\times OB = constant$, then the end B is said to trace an inverse line to the locus of A moving on the circle of diameter $OC$. Stated otherwise if O be a point on the circumference of a circle diameter $OP$, $OA$ by any chord, and B is a point on $OA$ produced, such that $OA \times OB = \text{a constant}$, then the locus of a point B will be a straight line perpendicular to the diameter $OP$. All this is proves as follows :

Draw a horizontal line from O. From A draw a line perpendicular to $OA$ cutting the horizontal at C. $OC$ is the diameter of the circle on which the point A will move about O such that $OA * OB$ remains constant. Now, $\Delta s \ OAC \ and\ ODB$ are similar

But $OC$ is constant and so that if the product $OA \times OB$ is constant, $OD$ will be constant, or the position of the perpendicular from B to $OC$ produced is fixed. This is possible only if the point B moves along a straight path $BD$ which is perpendicular to $OC$ produced. A number of mechanisms have been innovated to connect O, B and A in such a way as to satisfy the above condition. Two of these are given as follows :

1. The Peaucellier Mechanism The mechanism consists of isosceles four bar chain $OKBM$ (Figure 2.2). Additional links $AK$ and $AM$ from, a rhombus $AKBM$. A is constrained to move on a circular path by the radius bar $CA$ which is equal to the length of the fixed link $OC$. 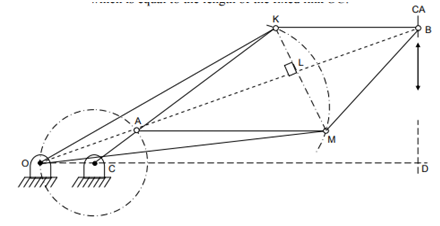 From the geometry of the figure, it follows that

Hence, $OA \times OB$ is constant for a given configuration and B traces a straight path perpendicular to $OC$ produced. 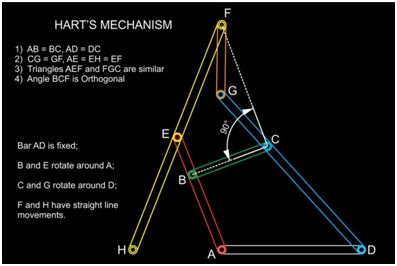 This is also known as crossed parallelogram mechanism. It is an application of four-bar chain. $PSQR$ is a four-bar chain in which $SP = QR\ and\ SQ = PR$.On three links $SP, SQ\ and\ PQ$, then it can be proved that for any configuration of the mechanism : $OA \times OB = Constant$ 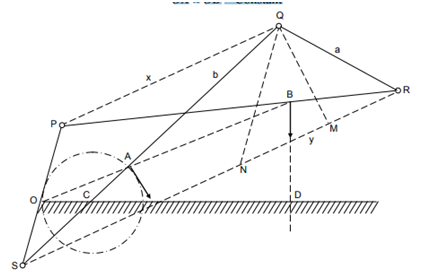 It is therefore, concluded if the mechanism is pivoted at Q as a fixed point and the point A is constrained to move on a circle through O the point B will trace a straight line perpendicular to the radius $OC$ produced.

The proof is given as follows,

It is therefore, concluded if the mechanism is pivoted at Q as a fixed point and the point A is constrained to move on a circle through O the point B will trace a straight line perpendicular to the radius $OC$ produced.

Approximate Straight-line Mechanisms With the four-bar chain a large number of mechanisms can be devised which give a path which is approximately straight line. These are given as follows:

$OABO$’is the mechanism used for Watt for obtaining approximate straight line motion (Figure 2.4). It consists of three links :$OA$ pivoted at O. O’B pivoted at O’ and both connected by link AB. A point P can be found on the link AB which will have an approximate straight line motion over a limited range of the mechanism. Suppose in the mean position link $OA$ and $O’B$ are in the horizontal position an $OA’$ and $O’B’$ are the lower limits of movement of these two links such that the configuration is $OA’B’O’$. Let I be the instantaneous centre of the coupler link $A’B’$, which is obtained by producing $OA’$ and $B’O’$ to meet at I. From I draw a horizontal line to meet $A’B’$ at $P’$. This point $P’$, at the instant, will move vertically.

Considering angles $\Phi$ and $\Theta$ being exceedingly small, as an approximation,

Where a and b are the lengths of $OA$ and $O’B$ respectively. Since, both $OA$ and $OB$ are horizontal in the mean or mid-position ever point in the mechanism then moves vertically.

Hence, if P divides $AB$ in the ratio

then P will trace a straight line path for a small range of movement on either side of the mean position of $AB$.

It is shown in Figure 2.5. It is a modification of Scott-Russel mechanism. It consists of crank $OC$ pivoted at O, link $O’P$ pivoted at O*’* and a link $PCR$ as shown. It is, in fact, a laid out four-bar mechanism. Line joining O and P is horizontal in middle position of the mechanism. The lengths of the link are so fixed such that:

If this condition is satisfied, it is found that for a small angular displacement of the link $O’P$, the point R on the link $PCR$ will trace approximately a straight line path, perpendicular to line $PQ$. 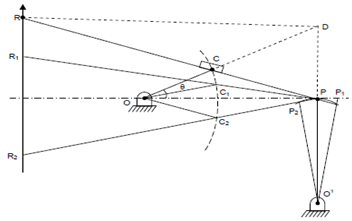 In Figure 2.5, the positions both of P and R have been shown for three different configuration of links. It may be noted that the pin at C is slidable along with link $RP$ such that at each position the above equation is satisfied.