Gears can be used for a whole lot of things, speed amplification to torque amplification, which is power transmission varying. gears are used to transmit motion form one shaft to next. Spur gears are normal gears with parallel tooth and are most common types of gears used for parallel meshing.however helical gears are more popular and better for working with. Bevel gears are used for motion transfer into perpendicular directions. worn gears are used for heavy reduction and speed control. This however increases torque magnificently. Pinions and racks are used to transmit rotational motion as linear actuation. Note that gears or no other device increases the input. It just takes the input of various forms and converts the various forms of power into other according to meshing. Gears also change the direction of motion. Two gears meshed together have motion in opposite directions. now, a new term called idler gear comes in to play if you want to mesh two gears and still keep the same direction of motion.

The gears can be classified according to:

1. The position of shaft axes

3. The type of gears

According to the position of shaft axes:

Gears may be classified according to the relative position of the axes of revolution. The axes may be:

1. Parallel shafts where the angle between driving and driven shaft is 0 degree. Examples include spur gears, single and double helical gears.

2. Intersecting shafts where there is some angle between driving and driven shaft. Examples include bevel and miter gear.

3. Non-intersecting and non-parallel shafts where the shafts are not coplanar. Examples include the hypoid and worm gear. 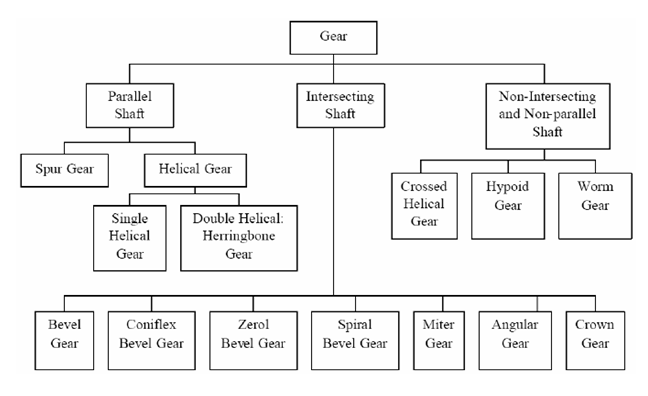 According to peripheral velocity:

Gears can be classified as:

1. Low velocity type, if their peripheral velocity lies in the range of 1 to 3 m/sec.

2. Medium velocity type, if their peripheral velocity lies in the range of 3 to 15 m/sec.

According to teeth position: Gears are classified as straight, inclined and curved.

1. Straight gear teeth are those where the teeth axis is parallel to the shaft axis.

2. Inclined gear teeth are those where the teeth axis is at some angle.

3. Curve gear teeth are curved on the rim’s surface.

Spur gears are used to transmit power between two parallel shafts. The teeth on thesegears are cut straight and are parallel to the shafts to which they are attached.

• Simplest and most economical type of gear to manufacture.

• Not suitable when a direction change between the two shafts is required.

• Produce noise because the contact occurs over the full face width of the mating teeth instantaneously.

Helical gears resemble spur gears, but the teeth are cut at an angle rather than parallel to the shaft axis like on spur gears. The angle that the helical gear tooth is on is referred to as the helix angle. The angle of helix depends upon the condition of the shaft design and relative position of the shafts. To ensure that the gears run smoothly, the helix angle should be such that one end of the gear tooth remains in contact until the opposite end of the following gear tooth has found a contact. For parallel shafts, the helix angle should not exceed 20 degrees to avoid excessive end thrust.

The longer teeth cause helical gears to have the following differences from spur gears of the same size:

• Tooth strength is greater because the teeth are longer than the teeth of spur gear of equivalent pitch diameter.

• Can carry higher loads than can spur gears because of greater surface contact on the teeth.

• Can be used to connect parallel shafts as well as non-parallel, non-intersecting shafts.

• Quieter even at higher speed and are durable.

• Gears in mesh produce thrust forces in the axial directions.

A bevel gear is shaped like a section of a cone and primarily used to transfer power between intersecting shafts at right angles. The teeth of a bevel gear may be straight or spiral. Straight gear is preferred for peripheral speeds up to 1000 feet per minute; above that they tend to be noisy. 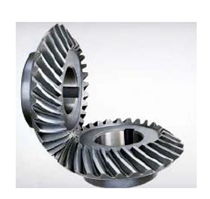 • Designed for the efficient transmission of power and motion between intersecting shafts. A good example of bevel gears is seen as the main mechanism for a hand drill. As the handle of the drill is turned in a vertical direction, the bevel gears change the rotation of the chuck to a horizontal rotation.

• Permit a minor adjustment during assembly and allow for some displacement due to deflection under operating loads without concentrating the load on the end of the tooth.

Mitter gears are identical to bevel gears with the exception that both gears always have the same number of teeth.

• They provide a steady ratio; other characteristics are similar to bevel gears.

• They are used as important parts of conveyors, elevators and kilns.

• Gear ration is always 1 to 1 and therefore not used when an application calls for a change of speed.

Hypoid gears are a modification of the spiral bevel gear with the axis offset. The distinguishing feature of hypoid gears is that the shafts of the pinion and ring gear may continue past each other, never having their axis intersecting. 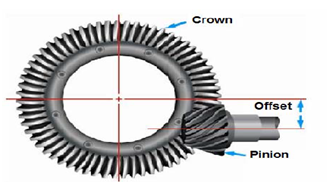 The major advantages of the hypoid gear design are that the pinion diameter is increased, and it is stronger than a corresponding bevel gear pinion. The increased diameter size of the pinion permits the use of comparatively high gear ratios and is extremely useful for non-intersecting shaft requirements such as automotive applications where the offset permits lowering of the drive shaft.

Worm gears are used to transmit power between two shafts that are at right angles to each other and are non-intersecting.Worm gears are special gears that resemble screws, and can be used to drive spur gears or helical gears. Worm gearing is essentially a special form of helical gearing in which the teeth have line contact and the axes of the driving and driven shafts are usually at right angles and do not intersect. 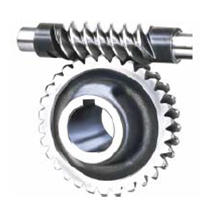 • Meshes are self-locking. Worm gears have an interesting feature that no other gear set has: the worm can easily turn the gear, but the gear cannot turn the worm. This is because the angle on the worm is so shallow that when the gear tries to spin it, the friction between the gear and the worm holds the worm in place. This feature is useful for machines such as conveyor systems, in which the locking feature can act as a brake for the conveyor when the motor is not turning.

• Worm gear is always used as the input gear, i.e. the torque is applied to the input end of the worm shaft by a driven sprocket or electric motor.

• Best suited for applications where a great ratio reduction is required between the driving and driven shafts. It is common for worm gears to have reductions of 20:1, and even up to 300:1 or greater.

• Yield low efficiency because of high sliding velocities across the teeth, there by causing high friction losses.

• When used in high torque applications, the friction causes the wear on the gear teeth and erosion of the restraining surface.

A gear can be defined in terms of its pitch, pressure angle and number of teeth. Let’s discuss few terms here: 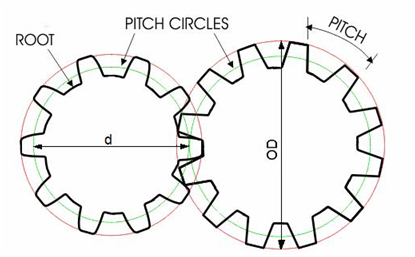 Root - The root is the bottom part of a gear wheel.

Pitch - Pitch is a measure of tooth spacing along the pitch circle. It is the distance between any point on one tooth and same point on the next tooth. It is expressed in the following forms:

Diametral Pitch (Pd) is the number of teeth per inch of the pitch diameter and is also an index of tooth size. It is given as:

A large diametral pitch indicates a small tooth and vice versa. Another way of saying this; larger gears have fewer teeth per inch of diametral pitch.

The use of diametral pitch is a handy reference in gear design. An important rule to remember is that a pair of gears can only mesh correctly if and when the diametral pitch (Pd) is the same, i.e.:

Module (m) is the metric equivalent of diametral pitch, i.e. the pitch diameter (in mm)divided by the number of teeth, but unlike diametral pitch, the higher number, the larger the teeth. Meshing gears must have the same module:

Circular Pitch (Pc): is the distance from a point on one tooth to the corresponding poingon the adjacent tooth, measured along the pitch circle. Calculated in inches, the circular pitch equals the pitch circle circumference divided by the number of teeth: 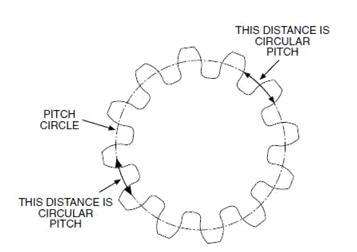 The product of the circular pitch and the diameteral pitch is equal to pi ( $\pi$).

Number of Teeth (N): The number of gear teeth is related to the diameteral pitch and the pitch circle diameter by equation $Z= d * P_d$ .

Tooth Size: Diameteral pitch, module and circular pitch are all indications of tooth size;ratios which determine the number of teeth in a gear for a given pitch diameter. In designing a gear set, the number of teeth in each member is of necessity. As a rule of thumb, teeth should be large and low in number for heavily loaded gears and small and numerous for smooth operation.

Pitch point is the point where gear teeth actually make contact with each other as they rotate. Refer to the figure below for two meshing gears. The pitch point “P” always lies at the line connecting the centers of two gears. 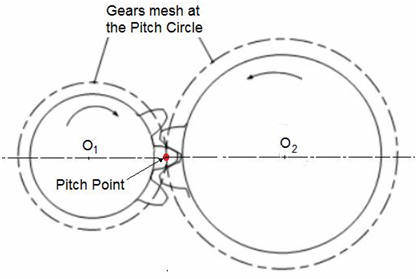