Simple Gear Train - Simple gear trains have only one gear per shaft. The simple gear train is used where there is a large distance to be covered between the input shaft and the output shaft.

In a compound gear train at least one of the shafts in the train must hold two gears. Compound gear trains are used when large changes in speed or power output are needed and there is only a small space between the input and output shaft. 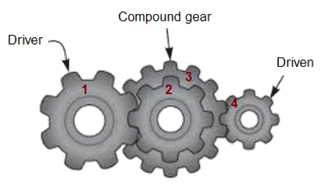 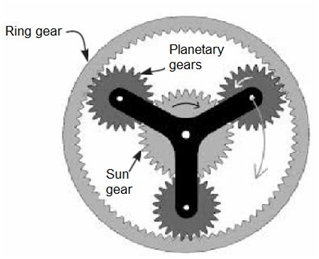 We have learnt in the previous section that “If two gears are in mesh, then the product of speed (revolutions) and teeth must be conserved”. Let’s check this simple rule with a help of an example.

Also, the second gear will be turning slower than the first because it is larger, and larger gears turn slower than smaller gears because they have more teeth.

Consider a simple gear train shown below. Notice that the arrows show how the gears are turning. When the driver is turning clockwise the driven gear is anti-clockwise. 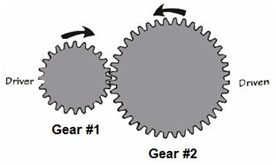 The figure below shows a set of compound gears with the two gears, 2 and 3, mounted on the middle shaft b. Both of these gears will turn at the same speed because they are fastened together, i.e. $N_b = N_2 = N_3$ 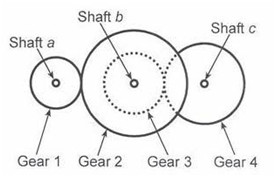 So the end-to-end gear ratio is $\frac{(Z1\times Z3)}{ (Z2\times Z4)}$ and it does depend on the intermediate gears; unlike the previous case when each gear could turn on its own separate axis. Note that the resultant gear ratio is just the product of the two separate gear ratios:$\frac{Z3}{Z4}\times\frac{Z_1}{Z_2}$

In the figure below, Gears B and C represent a compound gear and have the following details: 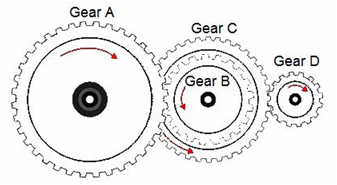 When answering a question like this, split it into two parts. Treat Gears A and B as the first part of the question. Treat Gears C and D as the second part.

Since the driving Gear A rotates 30 RPM and the Gear B is smaller than Gear A, we can conclude that the RPMs for Gear B is 30*3 = 90 RPM

Since Gears B and C represent a compound gear, they have the same rotational speed. 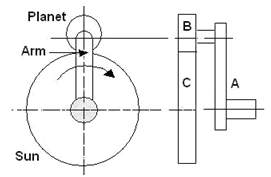 Observe point p and you will see that Gear B also revolves once on its own axis. Any object orbiting around a center must rotate once. Now consider that B is free to rotate on its shaft and meshes with C. Suppose the arm is held stationary and Gear C is rotated once. B spins about its own center and the number of revolutions it makes is the ratio $\frac{N_C}{ N_B}$. B will rotate by this number for every complete revolution of C.

Now consider that C is unable to rotate and the Arm A is revolved once. Gear B will revolve $1 + \frac{N_C}{N_B}$ because of the orbit. It is the extra rotation that causes confusion. One way to get around this is to imagine that the whole system is revolved once. Then identify the gear that is fixed and revolve it back one revolution. Work out the revolutions of the other gears and add them up. The following tabular method makes it easy.

Suppose Gear C is fixed and the Arm A makes one revolution. Determine how many revolutions the planet Gear B makes.

Step 1 is to revolve everything once about the centre.

Step 2 is to identify that C should be fixed and rotate it backwards one revolution keeping the arm fixed as it should only do one revolution in total. Work out the revolutions for B.

Step 3 is to simply add them up and find that the total revs of C is zero and the arm is 1.