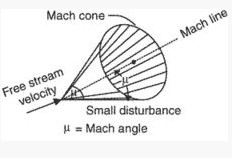 Mach angle:- It is defined as half of the angle of Mach cone. It is denoted by 'a'.

Zone of action:- When the Mach number is greater than 1 (M>1), the effect of disturbance is full only in the region inside the Mach cone. This region is known as the zone of action.