1
Explain the components of Intelligent Storage System and its types.

An intelligent storage system consists of four key components: front end, cache, back end, and physical disks. Figure 4-1 illustrates these components and their interconnections. An I/O request received from the host at the front-end port is processed through cache and the back end, to enable storage and retrieval of data from the physical disk. A read request can be serviced directly from cache if the requested data is found in cache. 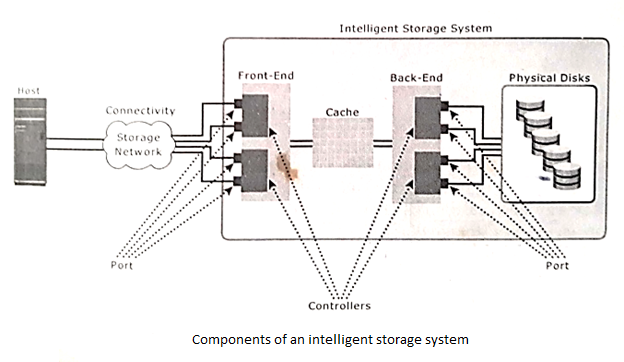 intelligent storage systems generally fall into one of the following two categories:

High end storage systems, referred to as active-active arrays, are generally aimed at large enterprises for centralizing corporate data. These arrays are designed with a large number of controllers and cache memory. An active-active array implies that the host can perform I/Os to its LUNs across any of the available paths (see Figure 4-7). 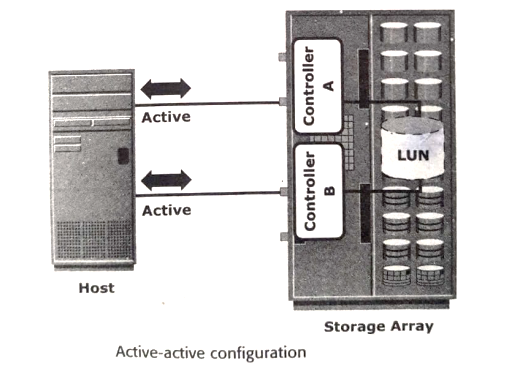 To address the enterprise storage needs, these arrays provide the following capabilities:

In addition to these features, high end arrays possess some unique features and functional's that are required for mission-critical applications in large enterprises.

Mid range storage systems are also referred to as active passive arrays and they are best suited for small and medium sized enterprises, In an active passive array, a host can perform I/Os to a LUN only through the paths to the owning controller of that LUN. These paths are called active paths. The other paths are passive with respect to this LUN, As shown in Figure 4-8, the host can perform reads or writes to the LUN only through the path to controller A, as controller A is the owner of that LUN. The path to controller B remains passive and no I/O activity is performed through this path. 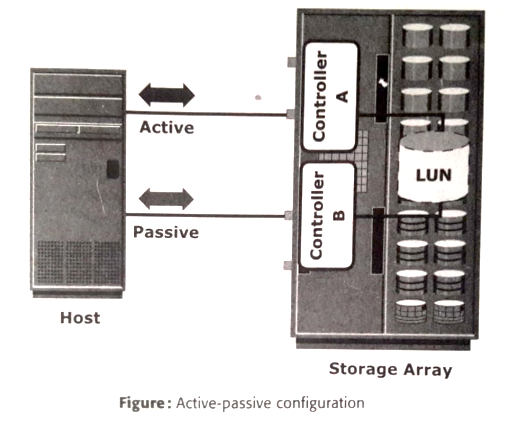 Mid-range arrays are designed to meet the requirements of small and medium enterprises, therefore, they host less storage capacity and global cache than active-active arrays. There are also fewer front-end ports for connection to servers. However, they ensure high redundancy and high performance for applications with predictable workloads. They also support array-based local and remote replication.