0
2.4kviews
What are the objectives of simulation in a manufacturing system?

Give the block diagram and explain the sequence of operations in a manufacturing system. Suggest a suitable simulation language for the same.

Objectives of simulation in manufacturing system

Before designing the model, one should first determine the scope the simulation. In this case the objectives of the study and data being collected are useful to freeze the scope of the work.

Level of details may be constrained by the availability of input data and the knowledge about the working of various system components and their interaction with each other in this process.

In case of new or non-existent systems, data may be inadequate and system knowledge may be based on assumptions and experts opinion.

The experienced simulation analyst normally involves customer throughout the simulation study to determine the purpose of the model which provides the basis of selecting a proper scope and level of detail.

Simulation is often used to evaluate and compare the effectiveness of various approaches and to suggest improvements. It can be also used to debug and fine-tune the system before it is installed.

A production process of a computer industry manufactured chips at the rate of one every four minutes. As the chips are ready, they send it to an inspector. The inspector takes 5 $\pm$ 2 minutes for inspection of each chip and rejects about 15% of them. The block diagram for the same is given below. 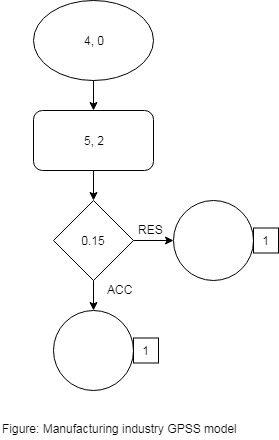 General purpose simulation system (GPSS) is a programming language designed for simulation of discrete systems. These are systems that can be modeled as a series of state changes that occur instantaneously over a period of time.

Each block type has a name and is represented by a symbol. It also has No. of data operands - i.e. A,B,C and so on..

Manufacturing process is represented by GENERATE block which creates transaction (chips) at the rate of one every four minutes. The inspection time is the expenditure of time which is represented by ADVANCE block. Now, the TRANSFER block is used to segregate the accepted chips and rejected chips. Finally, the created transaction is removed from simulation using "TERMINATE" block.