Total marks: 80
Total time: 3 Hours INSTRUCTIONS
1. Attempt any four questions 2. Use first angle method of projection, unless mentioned otherwise. 3. Write all answers on drawing sheets only & use both sides of the sheets. 4. Use your own judgment for any unspecified dimension. 5. Retain construction lines. 6. All dimensions are in mm.

1.a. A stick is 130 mm long is initially tangent to semicircle of 80 mm diameter at its left side corner. This stick now rolls over the circumference of semi circle without slipping. Draw the locus of the end point of the stick, which is away from the semicircle and name the curve.
(6 marks) 12580
1.b. For the object shown in figure draw the following views - 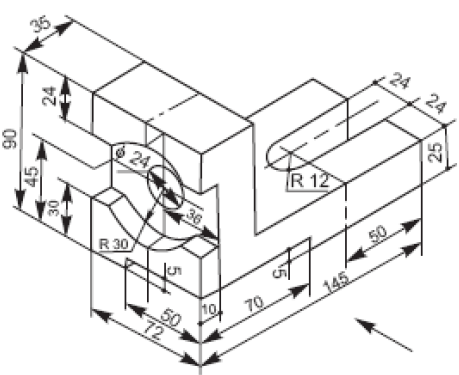 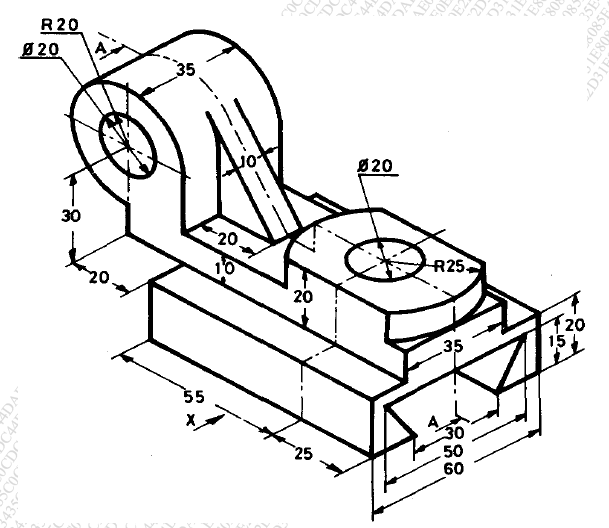 (15 marks) 12582
3. A pentagonal pyramid, side of base 35 mm and axis 70 mm long, is lying on one of its corner on the HP such that the triangular surface opposite to the corner is parallel to HP and perpendicular to VP, and base edge containing that triangular surface is parallel to both the HP and VP. Draw the projections of the solid when the apex of the pyramid is nearer to the observer.
(15 marks) 12583
4.a. A cylinder of 50 mm diameter of base and 70 mm length of an axis has resting on one point of the circumference in VP. Draw its projections if one of the generators is inclined at $30^0$ to VP and parallel to HP.
(6 marks) 12584
4.b. Figure shows three views of an object. Draw its isometric view with 'O' as origin. 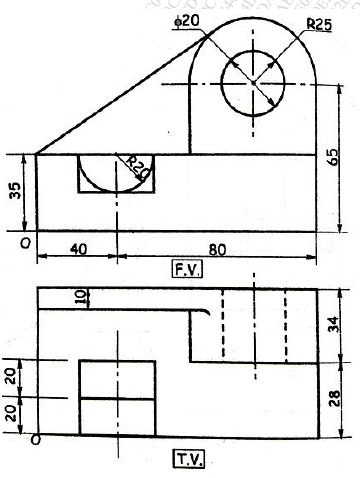 (9 marks) 12585
5. A pentagonal pyramid side of base 40 mm and height 80 mm is resting on HP on its base with one of the edge of base parallel to VP and away from VP. It is cut by an AIP bisecting the axis, the distance of the section plane from the apex being 13 mm, if the apex portion is removes, draw the elevation and sectional plan of the pyramid and show the true shape of the section. Also draw the development of the lateral surface of the remaining part of the pyramid
(15 marks) 12586
6.a. The F.V. of 85 mm long straight line AB measures 60 mm while its T.V. measures 70 mm. Draw the projection of AB if its end A is 10 mm above HP and 20 mm behind VP. while its end B is in first quadrant. Draw the projections of line and determine the inclination of line AB with the reference planes.
(9 marks) 12587
6.b. Figure shows two views of an object. Draw its isometric view with 'O' as origin.