An issue of growing concern for the present day environment is the impact of the various refrigerants on the ozone depletion and global warming of the environment. The main culprits in this case are the chlorine containing halogenated hydrocarbons, commonly known as chlorofluorocarbons or CFC which are being used as refrigerants.

The Earth’s atmosphere is made up of various layers. The layer just above the Earth’s surface is known as the troposphere. The troposphere extends up to 10 km from the surface. The ozone layer is just above the troposphere and located in the stratosphere. The stratospheric ozone is Earth’s natural protection to harmful ultraviolet (UV) radiation from the sun. UV radiation is harmful to human, plant and animal life. The ozone layer gets depleted by the action of these refrigerants.

CFCs, when they are released from the surface of the Earth, rise slowly into the stratosphere. Here they are bombarded by the incoming UV light from the Sun, which releases the chlorine atoms from the parent compound. It is this chlorine atom which reacts with the ozone molecules. The detailed reactions are given below:

The free chlorine atom can again take part in the reaction with another ozone atom. A single chlorine atom, released by the action of UV radiation on CFCs, can catalytically destroy tens of thousands of ozone molecules during its residence in the stratosphere. 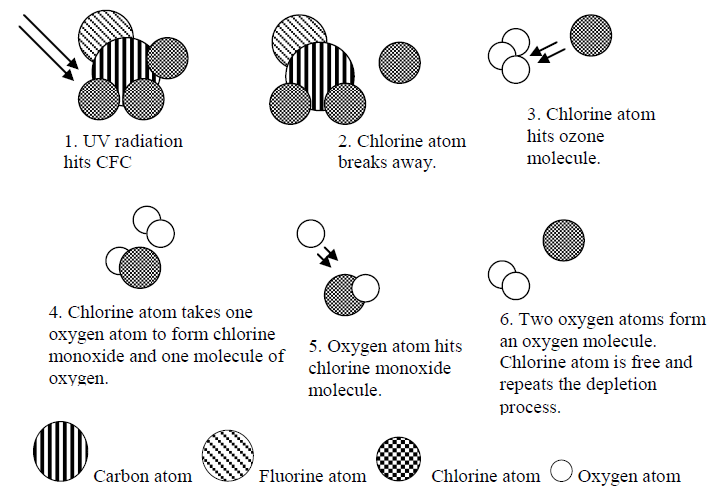 Ozone depletion will permit UV rays to reach earth which can result in several harmful effects on living creatures. The UV radiation can cause skin cancer, cataracts and destruction of the body’s immune system. Along with ozone depletion, CFC refrigerants also contribute to a large extent in the global warming of the planet. These gases create a greenhouse effect which traps the heat in the lower atmosphere. This makes the Earth warmer because the green house gases do not allow infrared radiation to pas through tem. The earth emits IR rays during its cooling when sun is not there. CO2 is the most important green house gas but one molecule of CFC has warming potential which is more than 1000 times the warming potential of one molecule of CO2. Sun’s rays are allowed into the lower atmosphere, but the heat from these rays is not allowed to escape.