1.a. Find the resultant of the parallel force system shown in Figure 1 and locate the same with respect to point C.

(5 marks) 00
1.b. Using Instantaneous Centre of Rotation (ICR) method, find the velocity of point A for the instant shown in Figure 2. Collar B moves along the vertical rod, whereas link AB moves along the plane which is inclined at $25^{\circ}$. 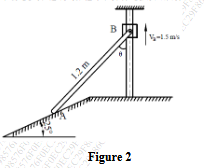 1.d. From the top of a tower, 28 m high, a stone is thrown vertically up with a velocity of 9m/s. After how much time will the stone reach the ground? With what velocity does it strike the ground?
(5 marks) 00
1.e. For the truss shown in Figure 4, find: (i) zero force members, if any (Justify your answer with FBD),(ii) support reactions at C and D 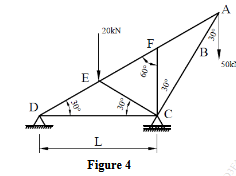 (5marks) 00
2.a. For the composite lamina shown in Figure 5, determine the coordinates of its centroid 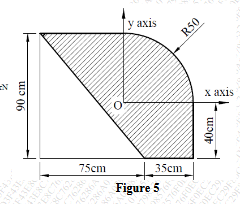 (8 marks) 00
2.b. Replace the force system shown in Figure 6 with a single force and couple system acting at point B. 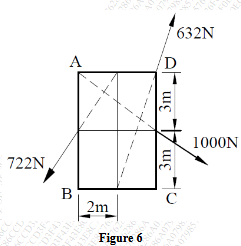 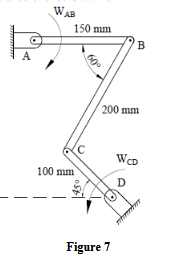 (7 marks) 00
3.a. Cylinder A (diameter 1m, weight 20kN) and cylinder B (diameter 1.5m, weight 40kN) are arranged as shown in Figure 8. Find the reactions at all the contact points. All contacts are smooth 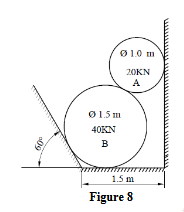 (6 marks) 00
3.b. Using Principle of Virtual Work, determine the force P which will keep the weightless bar AB in equilibrium. Take length AB as 2m and length AC as 8m. The bar makes an angle of $30^{\circ}$ with horizontal. All the surfaces in contact are smooth. Refer Figure 9. 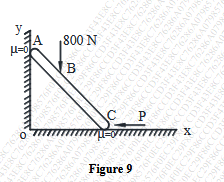 (8 marks) 00
4.a. Find the force ‘F’ to have motion of block A impeding up the plane. Take coefficient of friction for all the surfaces in contact as 0.2. Consider the wedge B as weightless. Refer Figure 11. 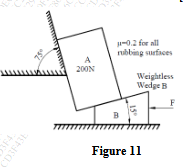 (5 marks) 00
4.c. A 75kg person stands on a weighing scale in an elevator. 3 seconds after the motion starts from rest, the tension in the hoisting cable was found to be 8300N. Find the reading of the scale, in kg during this interval. Also find the velocity of the elevator at the end of thisinterval. The total mass of the elevator, including mass of the person and the weighing scale,is 750kg. If the elevator is now moving in the opposite direction, with same magnitude of acceleration, what will be the new reading of the scale?
(8 marks) 00
5.a. The cylinder B, diameter 400mm and weight 5kN, is held in position as shown in Figure 12 with the help of cable AB. Find the tension in the cable and the reaction developed at contact C 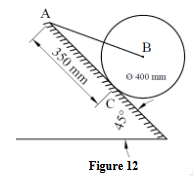 (4 marks) 00
5.b. Find the weight $W_B$ so as to have its impending motion down the plane. Take weight of block A as 2kN. The pin connected rod AB is initially is in horizontal position. Refer Figure 13. 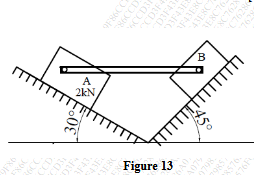 (5 marks) 00
5.c Two springs, each having stiffness of 0.6N/cm and length 20 cm are connected to a ball B of weight 50N. The initial tension developed in each spring is 1.6N. The arrangement is initially horizontal, as shown in Figure 14. If the ball is allowed to fall from rest, what will be its velocity at D, after it has fallen through a height of 15 cm? 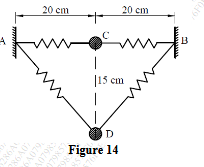 (5 marks) 00
5.d. Two balls, A (mass 3kg) and B (mass 4kg), are moving with velocities 25 m/s and 40 m/s respectively (Refer Figure 15). Before impact, the direction of velocity of two balls are $30^{\circ}$ and $50^{\circ}$ with the line joining their centers as shown in Figure 15. If coefficient of restitution for the impact is 0.78, find the magnitude and the direction of velocities of the balls after the impact 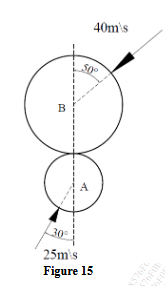 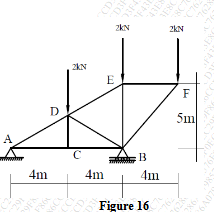