iOS: A mobile operating system developed by Apple Inc. and distributed exclusively for Apple hardware. It is used for iPhones, iPad and iPod touch. It is based on Mac OS X.

The following figure shows the architecture of iOS. It provides the layered architecture. Each layer brings a variety of framework that can be used in our application. Detailed description of each layer is given below. 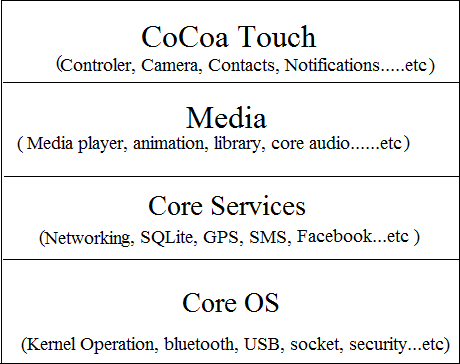 The bottom-most layer consists of hardware. Hardware is a physical chip soldered to iphone circuitry. It is an important layer for memory operations like managing the memory means allocating and deallocating memory once the applications finish its task. It is responsible for the file system task. The network related services also performed by this layer. The core layer consists of the following components:

It provides an abstraction to the services provided in the core OS layer. The core service layer consists of the following components-

This layer provides multimedia services that are used in iOS devices. It holds the Graphics libraries. The media layer made up of the following components.

This layer is the uppermost layer of architecture provides the actual interface for the users to use services. Users can install and use the actual applications like camera, games, contacts, apps, notifications, etc. It supports multi-touch capability. Cocoa touch consists of the following components.