In FDMA, the entire spectrum is divided into narrow frequency channels and then each unique channel is assigned to individual users. These channels are assigned on demand of users. During the period of the call, no other user can share the same channel. In FDMA/FDD systems, which are more common, each user is assigned a channel as a pair of frequencies; one is used for the forward channel while the other is used for the reverse channel. FDMA was the basic multiple access technique for the 1G AMPS systems. The technical definition of the FDMA system is given as,

“ FDMA is a multiple access method in which users are assigned specific frequency bands. The user has sole right of using the frequency band for the entire call duration. (Qualcomm, 1997)”

As shown in Figure 1, the entire spectrum is divided into four channels named as channel A-D. Each channel is allotted to a single unique user. The user does not use the channel for the entire time interval as in a two way communication, one user cannot speak for more than 60 - 70 $\%$ on an average. Hence traffic is intermittent and bursty which is illustrated in Figure 1. 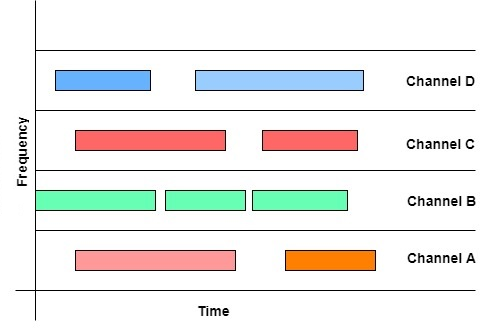 If a US AMPS cellular operator is allocated 12.5 MHz for each simplex band, the guard band at the two edges of the allocated band is 10 KHz and the channel bandwidth ( for each user ) is 30 KHz, find the number of channels available in an FDMA system.

i) Nonlinear Effects in FDMA

In FDMA, many channels share the same antenna at the Base Station. The power amplifiers or the power combiners, when operated at or near saturation for maximum power efficiency, are nonlinear.

Figure 2 (a) shows a FDMA/FDD system which was commonly used in 1G AMPS systems and a number of cordless telephones. In these types of systems, the forward and reverse channels, use different frequencies and a fixed channel pair is assigned to a user terminal to communicate. As discussed in chapter 2, the AMPS system allocates 30 KHz of bandwidth for each forward and reverse channel. There are a total of 832 channels in a bandwidth of 25 MHz in each direction.

Figure 2 (b) shows an example of FDMA /TDD system which was commonly used for digital cordless telephony standard. Each user is assigned a single carrier frequency for communication. The forward and reverse transmissions are done on alternative time slots. The total allocated bandwidth is 4MHz supporting 40 carriers each using 100 KHz of bandwidth. Each channel is divided into time slots of 1ms. 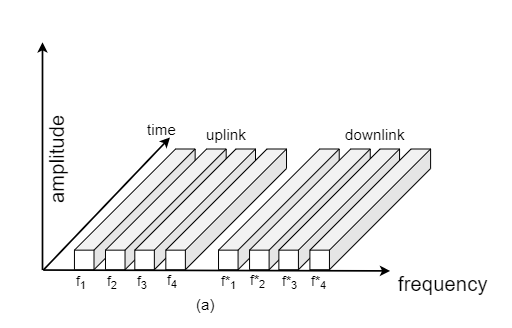 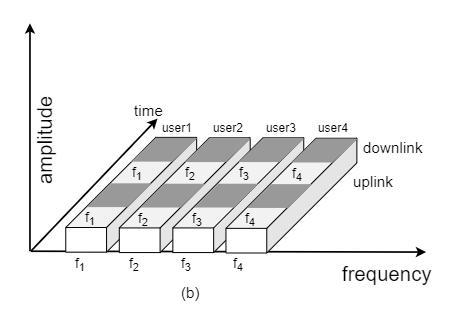 ii)Difference between FDM and FDMA

FDM is a process of multiplexing several signals into one using modulation techniques so that they all could be transmitted using a single frequency channel which has a large bandwidth. It belongs to physical layer because operation on signals is using filters and modulating circuits. For example, when a request is made for a webpage, a banking transaction or a video streaming service from a single mobile phone, all these requests have to be multiplexed on the same frequency channel and transmitted.

On the other hand FDMA is a technique or a protocol defined to access a channel based on FDM method. It belongs to data link layer. For example, the way in which many users will get their requests will depend upon the multiple access technique adopted.