1. Impervious Cutoff :
Cutoff is a core in the foundation. The cutoff into the rock is useful for creating a seal between the dam core and foundation when the rock is relatively soft with decrease in permeability with depth below the surface. The foundation of cutoff are to reduce loss of stored water through the foundation and to prevent subsurface erosion by piping. The type of cutoff depends on the geological conditions of the foundation. The alignment of cutoff is so forced that its centre line is within the upstream core and approximately equal to on-third the base width of the dam from tor. It is also located 1/4th height of dam upstream from dam axis and is keyed into rock or continuous impervious strata. A botttom width of 10to 30 per cent of hydraulic head or 4 m minimum is provided in case of overburden. In soft rock and hard rock 1/2: 1 and 1/4: 1 side slope respectively may be provided. The depth of positive cutoff trench depends on the geological features influencing the configuration of the impervious substratum and profile of the unweathered mass of bed rock. The location and number of cutoff trenches depend on the nature of foundation materials and their geological structure but usually a single trench is excavated either at the upstream, central or at downstream.

Ordinary Method of Slices
In the method of slices, also called OMS or the Fellenius method, the sliding mass above the failure surface is divided into a number of slices. The forces acting on each slice are obtained by considering the mechanical (force and moment) equilibrium for the slices. Each slice is considered on its own and interactions between slices are neglected because the resultant forces are parallel to the base of each slice. However, Newton's third law is not satisfied by this method because, in general, the resultants on the left and right of a slice do not have the same magnitude and are not collinear.[16]

This allows for a simple static equilibrium calculation, considering only soil weight, along with shear and normal stresses along the failure plane. Both the friction angle and cohesion can be considered for each slice. In the general case of the method of slices, the forces acting on a slice are shown in the figure below. The normal ( $E_{r},E_{l}$) and shear ( ${ S_{r},S_{l}}$) forces between adjacent slices constrain each slice and make the problem statically indeterminate when they are included in the computation. 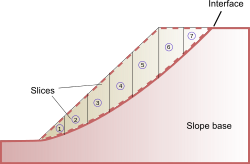 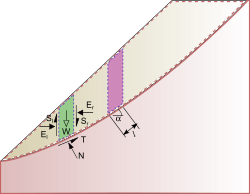 For the ordinary method of slices, the resultant vertical and horizontal forces are

\begin{aligned}\sum F_{v}=0&=W-N\cos \alpha -T\sin \alpha \\sum F_{h}=0&=kW+N\sin \alpha -T\cos \alpha \end{aligned}
because, in general, the resultants on the left and right of a slice do not have the same magnitude and are not collinear.
This allows for a simple static equilibrium calculation, considering only soil weight, along with shear and normal stresses along the failure plane. Both the friction angle and cohesion can be considered for each slice. In the general case of the method of slices, the forces acting on a slice are shown in the figure below. The normal ($E_r,E_l$) and shear ($S_r,S_l$) forces between adjacent slices constrain each slice and make the problem statically indeterminate when they are included in the computation.
where {\displaystyle k} k represents a linear factor that determines the increase in horizontal force with the depth of the slice. Solving for {\displaystyle N} N gives

${N=W cos\alpha - kWSin\alpha}$
Next, the method assumes that each slice can rotate about a center of rotation and that moment balance about this point is also needed for equilibrium. A balance of moments for all the slices taken together gives
{\begin{aligned}\sum M = 0= \sum_j(W_jx_j-T_jR_j-N_jf_j-kW_je_j)\end{aligned}}
Where j is the slice index,$ x_j, R_j,F_j,e_j $ are the moment arms, and loads on the surface have been ignored. The moment equation can be used to solve for the shear forces at the interface after substituting the expression for the normal force:
{\begin{aligned}\sum_jT_jR_j=\sum_j[W_jx_j-(W_j\cos\alpha_j-kW_j\sin\alpha_j)f_j-kW_je_j \end{aligned} }

Using Terzaghi's strength theory and converting the stresses into moments, we have
{\begin{aligned}\sum_j \tau l_jR_j=l_jR_j\sigma^{'}_j\tan\phi^{'}+l_jR_jc^{'}=R_j(N_j-u_jl_j)\tan\phi^{'}+l_jR_jc^{'}\end{aligned}} Where u_j is the pore pressure. The factor of safety is the ratio of the maximum moment from Terzaghi's theory to the estimated moment,
{\begin{aligned} Factor of safety =\frac{ \sum_j\tau l_jR_j}{\sum_jT_jR_j}\end{aligned}}

A dam with the diaphragm comprising mostly of rock materials is termed as rockfill dam. Term rockfill dam also refers to the dams constructed entirely of rock. Alternatively, a rockfill dam is defined as an embankment which used rock of various sizes to provide stability and an impervious membrane to impart water tightness. The mass stability is developed by the friction and interaction of one particle on another rather than by any cementing agent binding the particles together. The water pressure is resisted only by the weight of the rock.
Rockfill dams are less flexible than earthen dams but more flexible than gravity dams. The foundation requirements are more rigid than earthen dams but not so strict and rigid as for gravity dams. The foundation requirements for rockfill dams are (i) Essentially the foundation consists of hard durable rock which is not softened or eroded appreciably by water percolating from the reservoir,(ii)Foundation free from faults, shear zones or other structural weakness, and (iii) Minimum of foundation settlement.
Rockfill dams are suitable for areas where there is scarcity of earthfill materials but durable, hard and sound rock such as unweathered igneous and metamorphic rocks are available for the construction of the dam. Sedimentary rocks and shales which slake in the presence of air are not suitable. A rockfill dam is not suitable when the normal operation of the reservoir does not permit periodic inspection of the impervious membrane constructed on the upstream slope. It is also essential that the dam is not overtopped in time of flood and as such spillway, usually of side channel type, of adequate capacity is provided. 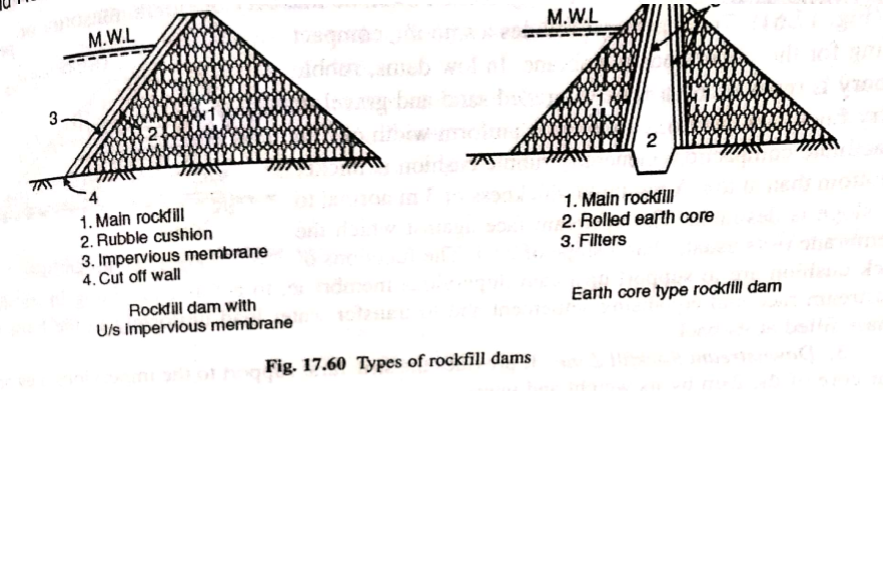 Top width: The top width is normally fixed according to working space required at top, the minimum being 6 m.
Side slope: The upstream slope usually has hand placed stones and such slopes of $\frac{1}{2}$: 1 to 1:1 is adopted. For dams over 50 m height, the slope adopted 1.3:1. The downstream slope made of dumped rock usually corresponds to the natural slope of the rock varying from 1.3:1 to 1.5:1. For high dams, berms are provided.
Base width: The overall base width usually ranges between 2.5 to 3 times the dam height.
Settlement: The settlement of compacted rockfill after placing the rubble cushion and the impervious facing is generally 1% of the height. It takes place during construction and up to the reservvoir is filled. The horizontal movement of rockfill also takes place on filling of reservoir and like vertical settlement it continues over a long time.
Dam Section A rockfill dam section comprises upstream impervious membrane, upstream rock cushion, downstream rockfill and upstream cutoff. The basic requirement is to ensure (i) Safety against overtopping, (ii) Stability and (iii) Safety against internal erosion.