In UMTS payload and control data transmission are carried out by channels, frames and slots in an efficient manner. UMTS uses WCDMA as a multiple access technique. UMTS allow both TDD and FDD transmissions. The version of UMTS which uses TDD is called as TD-UMTS.

In TDD Mode uplink and downlink are split in time with the base stations and then mobiles transmit alternatively on the same frequency. In FDD mode, the uplink and downlink are on different frequencies. The radio interface, Uu, is the interface between UE and UTRAN. It consists of three protocol layers as illustrated in Figure 9: Physical layer (layer #1), Data link layer (layer #2, lower part is called MAC and upper part is RLC), and Network layer (Layer#3, lower part is called RRC).

The physical layer in UTRAN performs the following functions:

The medium access control sublayer is responsible for efficiently transferring :-

Radio link control (RLC) sets up a logical link over the radio interface and is responsible for :-

Each layer provides service to other layer by different channels. These channels are classified in to three categories: Physical, Transport, and Logical.

Note : At UE side, The logical pieces of information mostly comes from higher layers (Application layer). In the MAC layer, these logical channels are multiplied with the Orthogonal Variable Spreading Factor (OVSF) codes (explained later). The OVSF code is allotted depending upon the current congestion in the network and type of data (simple e-mail/ web browsing/ multimedia transfer etc.) that has to be transmitted. After multiplication, these are called as transport channels. In the physical layer, these transport channels are mapped to a physical frequency channel of 5MHz and transmitted. At UTRAN side reverse process takes place. The channels related to layers are illustrated in following Figure 10: 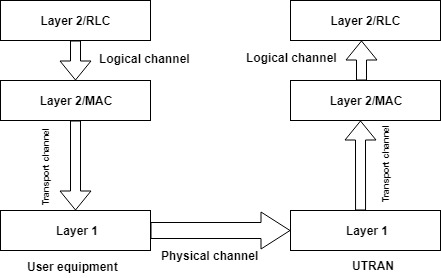 In this section, different types of channel on both uplink and downlink are presented.

These two channels exist for uplink (UL- DPDCH) as well as down link (DL-DPDCH).

B) Common Physical CHannels (CPCH): These channels are shared between users.

UMTS assures backward compatibility with the second generation TDMA based GSM and 2.5 G TDMA technologies such as GPRS and EDGE. The network structure and bit level packaging of GSM data is retained by UMTS with additional capacity.