All Forward link WCDMA channels are transmitted by a Base Station to Mobile station. A list of all Forward W CDMA channels, their numbers and functions are shown in following below table.

The pilot channel is directly modulo - 2 added to different orthogonal codes of different chip rates depending upon the bandwidth, while in other channels, the signals are processed (Convolutionally encoded, block interleaved and symbol repetition) before modulo - 2 addition with the appropriate orthogonal code. The processing of Forward WCDMA Pilot, Sync and Paging channels is illustrated in Figure 15, 16 and 17 respectively.

Forward Traffic Channel processing: It is different from control channels. The system allows multiplexing the control information (signaling bits 2, 4 Kbps) into the traffic channel stream (16, 32, 64 Kbps) to send and receive data between the MS and BS. The traffic channel bits and signaling channel bits are processed by separate convolution encoder (rate one half code), block interleaver and symbol repetition stage. The power control bits at 2 Kbps rates are processed through a symbol repetition stage. The traffic channel data, the signaling channel data and power control bits are then multiplexed. The resultant signal carries voice or data, power control bits and signalling channel data. The resultant multiplexed signal is then further scrambled by decimated long code with modulo - 2 operation. The use of 1 out of 64 bits is called decimation. The scrambler is constructed using every $64^{th}$ bit from a long code generator. The scrambler prevents long sequences of 0s or 1s from appearing in the data stream. The long code mask chosen for each channel establishes the voice or data privacy for that channel. Finally the resultant signal is modulo - 2 added to the Walsh (or Hadamard) code for the channel being used. The complete processing blocks are illustrated in Figure 18. 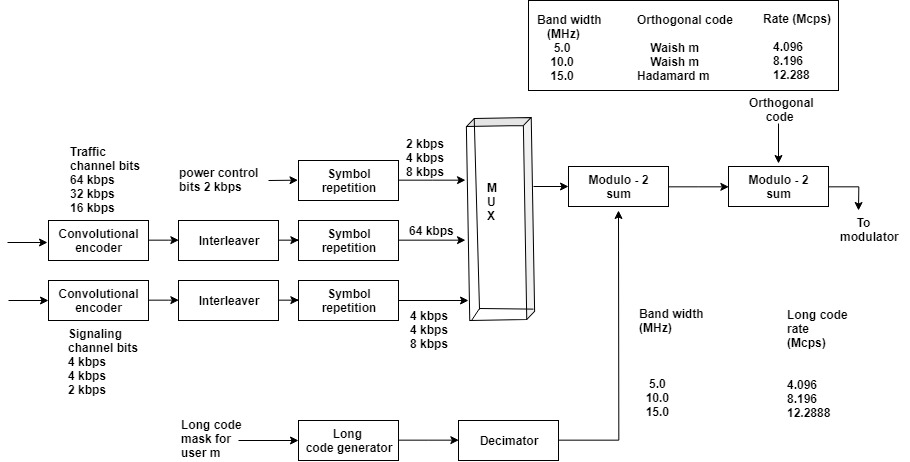 -The I and Q signals from each channel (pilot, sync, paging and traffic) are modulo - 2 added to an I and Q pseudo random noise sequence (also called as PN code).

All reverse WCDMA channels are transmitted from the Mobile station to Base Station. Different frequency bands are used on this reverse path. The reverse WCDMA channel consists of access channel and reverse traffic channel. Their functions, data rate and blocks used for processing are illustrated in below table.

Reverse Access channel processing is illustrated in Figure 20. The channel operates at 16 Kbps. The information bits are passed through various processing blocks. And final orthogonal spread signal is sent to the modulator.

Reverse Traffic Channel processing is illustrated in Figure 21 and 22. It carries the mobile stations’s encoded speech at 16, 32 or 64 Kbps or data up to 64 Kbps. The reverse traffic channel bits and signaling information bits are processed separately through various blocks (convolution encoder, block interleaver, symbol repetition and modulo - 2 sum with orthogonal code). The final spread traffic channel bits and signaling bits are sent to modulator.

Reverse WCDMA Modulator: The modulation process on reverse link is different from forward link as illustrated in Figure 23. 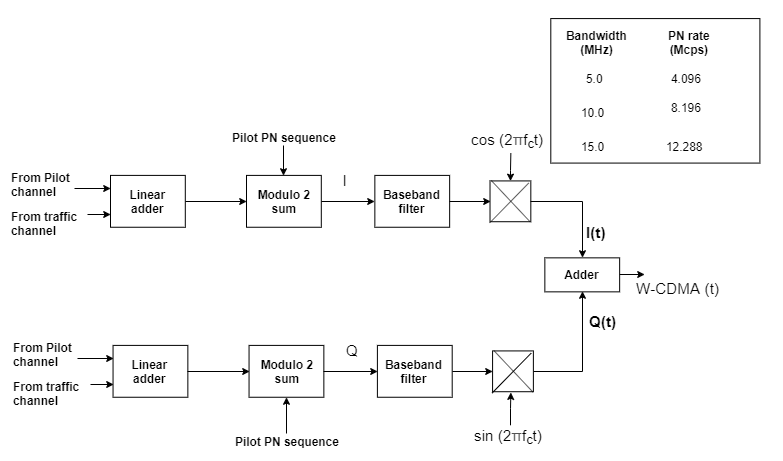 Comparison of WCDMA and IS-95

The main differences between WCDMA and IS95 are illustrated in below table.