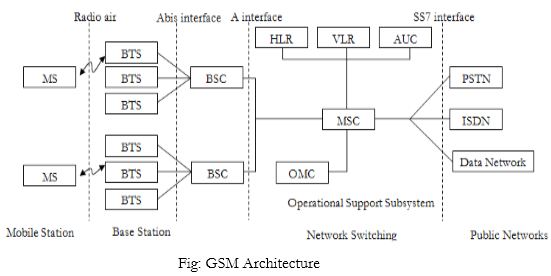 The GSM architecture consists of three major interconnected subsystems that interact with themselves and with users through certain network interface. The subsystems are Base Station Subsystem (BSS), Network Switching Subsystem (NSS) and Operational Support Subsystem (OSS). Mobile Station (MS) is also a subsystem but it is considered as a part of BSS.

A. Mobile equipment (ME):

A. Base Transceiver Station (BTS):

B. Base Station Controller (BSC):

3. Network Switching Subsystem (NSS): it manages the switching functions of the system and allows MSCs to communicate with other networks such as PSTN and ISDN. It consist of

C. Visitor Location Registers (VLR): - It is a temporary database which updates whenever new MS enters its area by HLR database. - It controls mobiles roaming in its area. It reduces number of queries to HLR. - Its database contains IMSI, TMSI, IMSISDN, MSRN, location, area authentication key.

4. Operational Support Subsystem (OSS): It supports the operation and maintenance of GSM and allows system engineers to monitor, diagnose and troubleshoot all aspects of GSM system. It supports one or more Operation Maintenance Centres (OMC) which are used to monitor the performance of each MS, Bs, BSC and MSC within a GSM system. It has three main functions: