A channel may be affected by fading and this will impact the signal to noise ratio. In turn this will impact the error rate, assuming digital data is being transmitted. The principle of diversity is to provide the receiver with multiple versions of the same signal. If these can be made to be affected in different ways by the signal path, the probability that they will all be affected at the same time is considerably reduced. Accordingly, diversity helps to stabilize a link and improves performance, reducing error rate.

Several different diversity modes are available and provide a number of advantages: 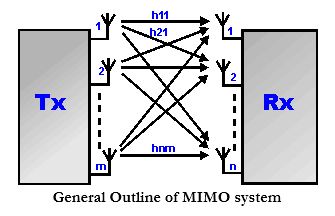 One of the core ideas behind MIMO wireless systems space-time signal processing in which time (the natural dimension of digital communication data) is complemented with the spatial dimension inherent in the use of multiple spatially distributed antennas, i.e. the use of multiple antennas located at different points. Accordingly MIMO wireless systems can be viewed as a logical extension to the smart antennas that have been used for many years to improve wireless.

It is found between a transmitter and a receiver; the signal can take many paths. Additionally by moving the antennas even a small distance the paths used will change. The variety of paths available occurs as a result of the number of objects that appear to the side or even in the direct path between the transmitter and receiver. Previously these multiple paths only served to introduce interference. By using MIMO, these additional paths can be used to advantage. They can be used to provide additional robustness to the radio link by improving the signal to noise ratio, or by increasing the link data capacity.

The two main formats for MIMO are given below:

What are multi antenna techniques??